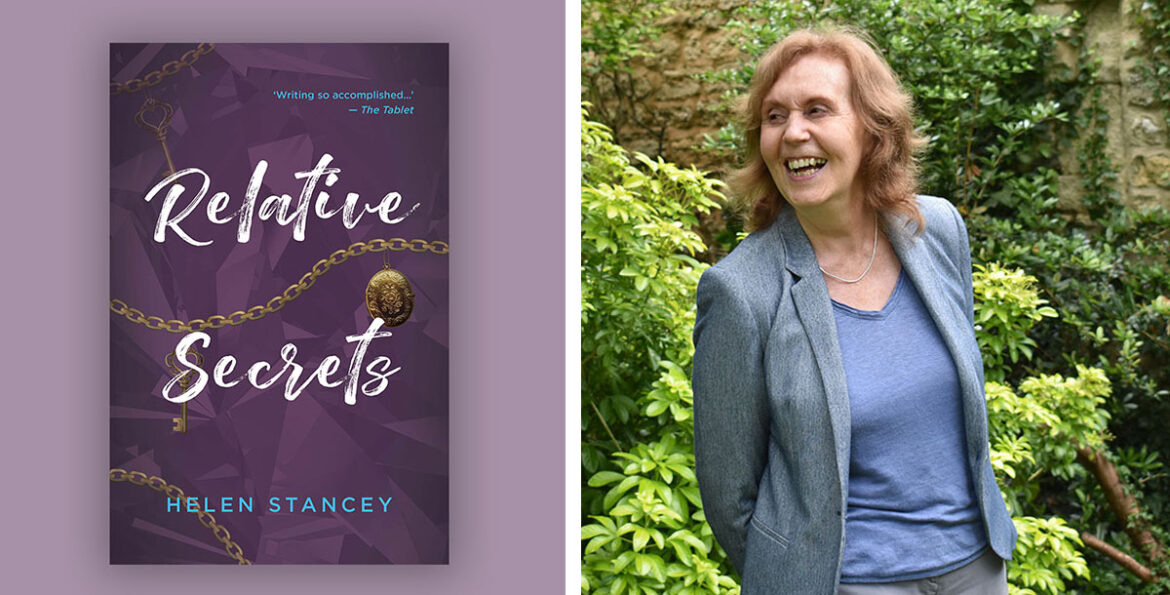 Helen Stancey’s latest novel, Relative Secrets, is published by Fairlight Books on 25 March 2021. In this beautifully told drama of family secrets, she once again picks through the everyday of life to uncover poetry, pain and ultimately love. Helen has previously written two novels, Words in 1983 and Common Ground in 1986, and a short story collection, The Madonna of the Pool, which we published in 2017. We are delighted to welcome her back and ask some questions about her exciting new novel.

Your latest book, Relative Secrets, is your return to novel writing. What inspired you to write longer fiction again?

I never stopped writing, I was just writing different sorts of things, mainly academic and educational. There are also a few other short stories from then and an unfinished novel.  The novel was set aside because it was heading into some pretty dark areas. When writing, I experience whatever each character experiences. It was a particularly demanding time in my life and I finally didn’t feel up to heading into those dark areas myself.

What message do you hope the reader takes away from the novel?

The power of steady, unostentatious love.

In 2017, we published your short story collection, The Madonna of the Pool. When writing the collection, were you ever tempted to expand any of those stories or did they always feel fully formed as short stories?

They were always intended to be short stories.  In the past, I wrote poetry, and I found similarities when writing the sorts of stories in the collection, stories that aim to capture the essence of a person or situation and hint of its ramifications.

In Relative Secrets, you write from the perspective of different characters in the same family. Why did you choose to do this 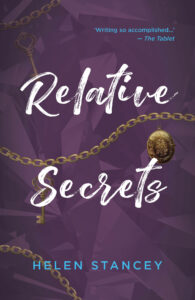 and were there any challenges?

I often try to imagine the world from different people’s points of view, so it didn’t seem a strange thing to be doing in Relative Secrets. The novel I’m working on at the moment, though, doesn’t have multiple viewpoints.

Is there a particular character in Relative Secrets that you most relate to?

Not consciously. I expect there’s a bit of me in most of the main characters.

One of the characters in Relative Secrets, Mary, is suffering from dementia. How did you manage to get in her mindset?

Over the years, I’ve had a certain amount of experience of people who have dementia. My first experiences were in my late teens when I did summer holiday jobs in a hospital. I was put on what was termed a ‘geriatric ward’, but none of the women there was ever going back home. At university, I was a member of Community Service Volunteers, visiting an elderly lady weekly in her flat and when she was subsequently moved into care.  Like many people, I have also known dementia several times much closer to home, still ongoing.  Dementia hits different people in different ways.  Although Mary is a gentle and sweet person as she fades, not everyone is. But it goes without saying that developing dementia has a devastating effect on an individual and on their entire family. I can only hope that the solution is found soon.

Why did you think it was important that the story was set in 1999?

In 1999 there was a sense that the new millennium would bring a change for the better. There was hope. In the novel, the main characters have experienced a great deal of disturbance but at the end much has been resolved and they can begin to look forward to a brighter future. I wanted their lives to mirror the spirit of the time.

Another reason for setting it around that time, although not specifically 1999, was that some of the characters are young teenage boys. I’m well acquainted with the slang of that period and the way boys talked then, and if I needed to be reminded or to check on anything, I had willing sources with good memories. I wouldn’t know the slang and conversation styles of this age group today.

Do you feel your approach to writing has changed over time or is it largely the same as when you wrote your debut novel Words?

I don’t think it’s changed much. I still do the first creative part of the writing in pencil on paper then type up that day’s stint. Editing I do on the computer, but for the initial writing, when you’re creating people and situations that don’t actually exist until you get them down, I find that there’s more of a direct, uninterrupted connection from your brain, down your arm, to pencil and paper. I don’t think this is just a matter of age and habit. I know older writers who type from the outset and I hear of younger writers who, like me, prefer physical writing initially.  It’s whatever works for the individual.

Actually, I don’t find writing at all an easy activity. I’m not sure I even find it pleasurable until it’s done. It’s a bit stressful when it’s in progress.  But I do know that I find it very uncomfortable and unpleasurable not to be writing, so it’s better just to get on with it.

Most of my life, I’ve had to fit writing in whenever I could round everything else. There’s less of the ‘everything else’ now but I don’t follow a timetable. I draw and paint too, so I make writing the priority until I get to a problematic bit that could benefit from marinating in my brain. Then I paint until a solution to the writing problem emerges, or until I come to a problem in the picture. At that point I go back to the writing. If I don’t feel like committing to a painting, I might peel some potatoes or do the ironing instead – something like that. For me, mundane domestic work can help solve creative problems. Which is just as well.

Read more about Relative Secrets here. You can also check out our previous interview with Helen, here.