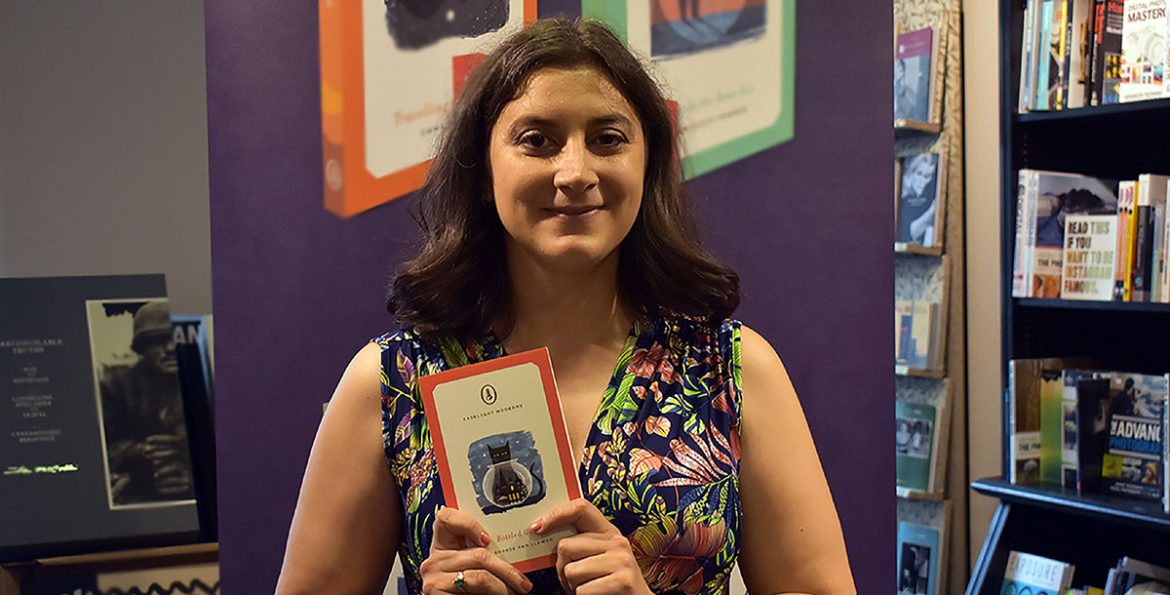 Sophie van Llewyn is the brilliant author behind the magical realist novella, Bottled Goods. In this interview Sophie has shared with us the first time she considered becoming a writer, why she loves the novella-in-flash genre, and what inspired her to write Bottled Goods.

I was in Middle School, and our Romanian Literature teacher told us about this regional competition. I had (have) a very competitive nature, and I love books, so I thought I should give it a try. I wrote a short story, and it featured a character named ‘Codruta’. I remember having lost the first draft, and writing an entirely new one, which didn’t even compare to the first one — it was much worse. I was angry with myself for having misplaced my story. Nonetheless, the second draft still won third place in the regional competition. This was huge, in terms of encouragement, for me.

The following year I was invited to write for the school paper. I gave up writing in high school — I had no support from my Romanian teacher. Now, I wish I had kept writing.

Yes, yes, yes! But I never thought it was actually possible to become a writer. In my head, you had to belong to a very posh writers’ circle (and when I say this, I have in mind the fancy salons of late 19th century, frequented by people of the arts). I never had any idea how one starts being a writer, or what makes a writer, or how one ever gets any work published.

It turns out, it’s so much easier nowadays to become a writer. The perception of what makes a writer a writer, and the access to information have changed a great deal. You are a writer as soon as you sit down in front of your computer, or with pen and pencil in hand, and simply start writing. If you want to improve your skills, there are so many courses, and workshops, and wonderfully supportive networks on social media. There are hundreds of venues out there, online and in print, that publish work from poetry, to flash fiction, non-fiction, and novel snippets. There are competitions that help one get noticed. Literally, the Internet is brimming with opportunities, and advice on how to get published and improve yourself. This access to all kinds of information is unprecedented — any distance can be overcome, and a Romanian writer who lives in Germany can get published in England.

You also write short stories. How do short story, flash-fiction and novella-in-flash genres differ for you as a writer?

My writing processes, when I approach them, are entirely different. I write flash fiction in a single sitting, and when I edit I might re-write the entire piece a few times in a row, until I’m happy with it. I go over every word multiple times, and check the sentence for rhythm. I read it aloud and edit until it sounds melodious.

With the novella-in-flash, I wrote the flashes just like I usually do, but I had a ‘master plan’, based on the intended story arc.

And with short stories — I usually write them in a few sittings, weigh and polish every single word. It may take weeks or months to write a single short story.

But what differs even more is the process of writing a novel. I’m currently working on a historical novel set during WW2 — and I’m discovering what works for me through trial and error. What I had to train — since October last year when I started writing it — is my feeble patience. 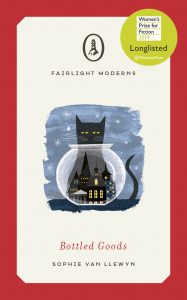 If you could describe Bottled Goods in one word what would it be?

What inspired you to write Bottled Goods?

There’s a story my godparents told me many times: at some point in the 1970s, they wanted to spend their vacation in the West. They were detained at Border Control for an entire day, while their car was taken apart. Border Security was looking for hidden cash or jewellery — they thought that my godparents wanted to defect. This was the core, the starting point of Bottled Goods: that day at the border.

Why did you decide to write it as a novella-in-flash?

I tried to write it as a flash fiction, as a short story, as a novella, but it didn’t work. The story lost its urgency when I tried to put it in lots of words. After I discovered the novella-in-flash, and after having researched the form for a bit, the story just began pouring out of me. Something just clicked.

Why did you decide to write in English?

I’d been writing in English for more than a year when I started Bottled Goods. The first novel I started writing was set in the UK and had a British narrator — it seemed natural to write it in English. But I also had the feeling that the English-speaking literary world was more transparent. The pathways to publication seemed to be more clear. There are so many publication opportunities in the UK, in the US, New Zealand. Getting shorter pieces published kept me going, and helped me believe in myself as a writer. I also met the members of my critique group (Christina, Stephanie and Kayla) during an online workshop, and they helped me improve so much as a writer, and helped me keep my motivation up. I wouldn’t have been here without them.

Also, I worked as an Assistant Editor at a literary magazine, Bartleby Snopes, for six months. It was a fun and invaluable experience — it’s amazing how fast you learn what works, and what doesn’t work in fiction, when reading submissions.

You were born and raised in Romania. Have you used your family’s communism experience in Bottled Goods?

Absolutely! Not only that, but I heavily used my own experience. The buildings, the mentalities, even foods and drinks that were produced under communism didn’t disappear overnight. I tried to make use of this sensorial side as much as possible, to create a complex, palpable world for the reader.

I think writing is a journey. I’ve discovered so many things I didn’t even know I believed in. If anything, writing has made me even more opinionated than I was. I think writing brought these ideas I believed in to the surface — and now I’m struggling to put them into a coherent and appealing form.

What has been the hardest part of Bottled Goods to write?

From a technical point of view, none. I drew up a board, and started sticking coloured post-its: one post-it per flash. I had an idea what those flashes should be about, and sometimes I moved them around, or add new post-its when I wanted a certain feeling or scene or transition to gain more depth. The novella-in-flash was incredibly fun to write. It gave me so much freedom. I didn’t write in chronological order. I simply wrote whichever flash I felt like writing.

But because it was my first work of longer fiction, I had the feeling at some point that it would never end, and that I only kept adding flashes to fill in the gaps in the story. I had no patience at the time. Consider this: I only needed a month and a half for that first draft!

Why did you choose Bottled Goods as the title of your story?

In the first draft of the story, Alina tries to spirit the entity in the bottle over the border (no spoilers!). I was fascinated by this idea, that Alina has bottled goods to declare at the border, but she doesn’t. The entity could have only been silenced by becoming bottled goods — this is why the title stuck.

What do you hope people take away from reading Bottled Goods?

Bottled Goods is, ultimately, a story about freedom: personal and political freedom. In these times when so many democracies are slipping into totalitarian regimes, I think it’s increasingly important to show what a dictatorship means.

What do you think makes a good novella-in-flash?

Emotional depth and forward movement. The narrative arc separates a novella-in-flash from a flash fiction collection.

Putting what I believe in, the ideas that fuel me, into a form that might appeal to a reader.  Make this reader pause, and think about the world, what makes it tick, and if there’s something we can change to make it better.

I’m inspired by the ideas I believe in. I believe in freedom of expression. I believe women have a right to have a job, choose their own husband, and generally make their own choices — we take this for granted, but this is actually an innovation, if you look at thousands of years of human history. I believe in healthcare for everyone, not only for the privileged.

I have tackled these ideas partly in my writing, and I have plans to express the others in the longer works that I’m currently working on.

I love writing so much, that I’m desperate to fit it in whenever I can. I was at home, caring for my daughter up until June this year, so I mainly wrote during her afternoon nap and in the evening, after she went to bed. But everything worked, really, I was so grateful whenever my husband took her out for a stroll, giving me a little more time to write.

We have a gorgeous round table right by the living room window, and it also commends a beautiful view of the house. But when I really have to focus, I sit at the kitchen table.

I’m completely obsessed by the Fire and Ice series by George R.R. Martin. It’s incredibly immersive, and that’s what I love most in literature. Not what you expected? I love a good fantasy book, and historical fiction (surprise, surprise!).

Do you have a pet peeve when it comes to writing? Something you notice yourself doing or something you pick-up in other’s writing?

I’m a big fan of plot, so when I stumble upon a work of fiction that relies exclusively on character development, I feel a bit cheated. I like to see movement and change, characters in action. I don’t think that literary fiction has to be static: look at Hillary Mantel, or at Maggie O’Farrel, or Dan Lungu, who is a Romanian author. Their novels are such rewarding experiences.

Do you have writer’s habit that helps you ‘get in the zone’?

A good cup of cappuccino, and a delicious piece of pastry, if possible (for instance, a nice, creamy Erdbeer Plunder). I can’t write if I’m hungry, I must fuel myself with sweets. And when I have to concentrate very, very hard, I need chocolate.

I do feel that I’ve evolved, and the most important factors that catalysed this evolution are the fact that I’ve kept writing, and that I had a fabulous writing group to give me excellent feedback, that helped me mature.

Keep at it. Snatch every moment you can to refine yourself: read, write, browse social media (yes, even that helps). And find yourself a critique group. Nothing can improve your writing more than the advice of a few friends you trust.

To learn more about Sophie, visit her personal website and listen to her interview with BBC’s The Arts Hour.