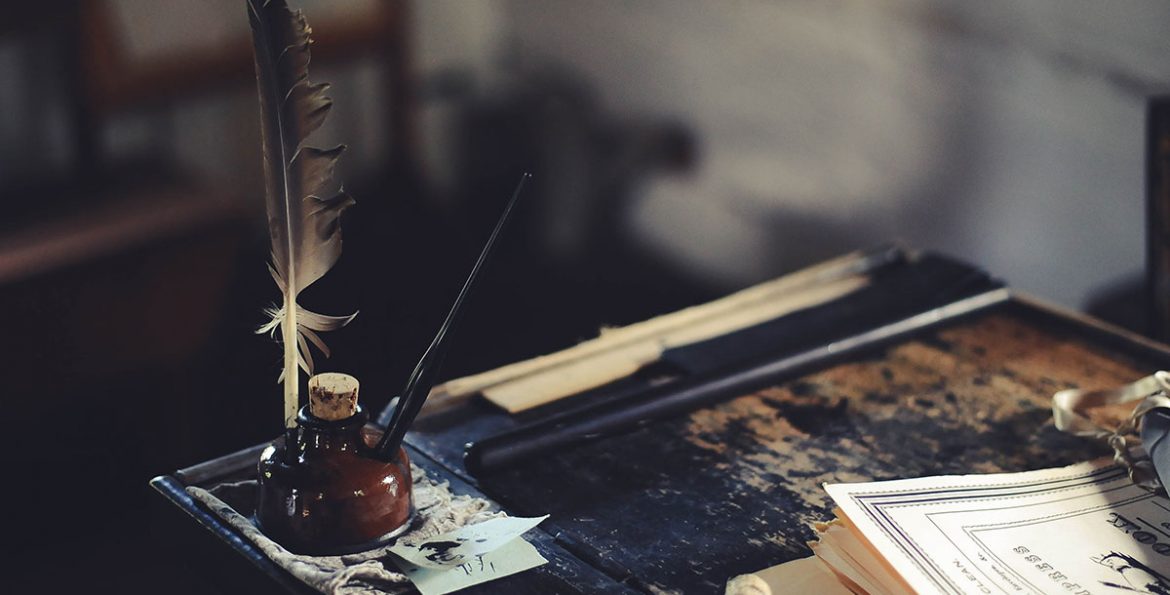 Saints & Trinkets: A Discussion of Barbara Mercer’s ‘The Glow Worm’

Barbara Mercer’s short story The Glow Worm weaves a rich tale that offers so much more than its surface meaning. Set in a time of religious turmoil in England, the story places us thrillingly close to the birth of William Shakespeare and the wealth of culture and literature that comes with him, adding more layers to an already engrossing read.

The story is based around Shakespeare’s father John and his struggles with iconoclasm in the days leading up to William’s birth. Barbara explains: ‘I didn’t want to ever say outright that it was about William’s dad but you can work it out pretty quickly’. She notes some of the subtle echoes of the associated literature sprinkled throughout. It’s hard to imagine any other writer other than the Sweet Swan of Avon provoking the same sensation at such small references.

It shows Shakespeare’s unique position in society today, abundantly clear from the daily outpouring of love for him during the celebrations of the anniversary of his death last year. Barbara attributes this to the great humanity in so many of his characters and the love this inspires. On Falstaff she comments: ‘People adore Falstaff, this old drunk who lies and is greedy… no judgement just love’.

Some would say the adulation for Shakespeare verges on worship. Barbara labels him a ‘secular saint’, which feels justified. Living near to his hometown of Stratford-Upon-Avon, I have experienced on a number of occasions the constant stream of visitors going for what Barbara terms ‘some tiny experience of him’. There is such irony to the scene on the streets. In the same way that you would purchase relics and badges to mark taking part in pilgrimages centuries ago, virtually any trinket or item can be bought with Shakespeare’s face plastered over it. Centuries after his birth, a time when the worship of specific saints through artwork and statues was being clamped down upon, the exact same practice is thriving in a non-religious setting.

For no other author would the hints at themes of fatherhood, mortality and Purgatory be so impactful, bringing to mind the tragic death of Ophelia in Hamlet and Shakespeare’s later career. Even the story’s somewhat mysterious title has a literary context, although an accidental one. Barbara tells of how she discovered a quote from the beginning of Hamlet when the ghost of his father appears. The line goes: ‘The glow-worm shows the matin to be near and ‘gins to pale his ineffectual fire’, ending with the ghost’s injunction ‘Hamlet, Remember me’[i]. Comparing Hamlet’s father’s strange existence in Purgatory with the outlawing of the concept of Purgatory in John’s time adds further weight to events.

Beyond the appeal of its proximity to the birth of a great, Barbara also takes on the challenge of post-Reformation England and historical fiction in the Tudor period, a popular yet challenging field. With authors such as Hilary Mantel, CJ Sampson and Rory Clements firmly embedded in the public consciousness, any author entering the genre is faced with a broad and rapturous audience, but also a high bar set for capturing the mood of the era. Barbara notes the popularity of the period, ‘It just already has this fascination for people’.

Balancing the historical knowledge with filling in the gaps is a big part of the challenge that authors like Barbara are faced with. There is a string of known events around the start of 1564 and Shakespeare’s birth. We know, for example, about the order to strip churches of their statues, artwork and trinkets. We know when Shakespeare was born, and how John Shakespeare’s fortunes later deteriorated from his position as Chamberlain of the Stratford council. Intriguing evidence suggesting Catholicism in the Shakespeare family, in the form of John’s ‘Spiritual Testament’ was discovered in 1757 in the house where William was born, but sadly this has now been lost. The strength of The Glow Worm is in how it fills in these moments with the thoughts and feelings of the protagonists. Barbara lays a sensitive and understanding path through John’s emotions in response to challenges to worship.

England’s decades-long religious upheaval offers a fascinating historical backdrop to the story. Shakespeare’s family would have dealt with four substantial changes in religion in just a twenty-year period. Barbara says she finds considering how the everyday folk coped more interesting than how the elites would have dealt with these changes. She is: ‘fascinated about how people who’ve had to do that felt, and how the ordinary people who couldn’t read and went to church felt. Imagine how few images they saw in their daily lives, they wouldn’t have paintings or anything except in church. To take them away would have been devastating’.

Some art historians tie-in the disappearance of imagery from English life with England’s lack of a visual art tradition for some two centuries after the Reformation. Barbara conveys the concern across generations for how ‘the old ways’ continued to hold sway.

This anxiety is highlighted by the awkward interweaving of very limited literacy and a new prominence for the Ten Commandments and other written texts. Barbara acknowledges that it’s likely John couldn’t sign his name so, as for many others, this might have fed into his concerns. Knowing the backstory of characters like Tobie, we are aware that the shift away from visual, tangible worship would mean a very different way of life, and we are drawn into the story through John’s worries about the matter.

Recent works such as Ellen Spolsky’s Literacy after Iconoclasm in the English Reformation have delved into the psychological impact of the removal of saints and statues. The Christians’ image of the deity was forcibly moved away from a familiarity with a particular statue or image, as the two doubtless had some convergence. Through kneeling before a crucifix, smelling incense, recognising how the torque of a twisted body would feel in one’s own, Jesus’ pain would not be an abstraction. It became embedded through the nerves and limbs – an embodied experience.

With its fully-realised characters, historical and literary context and emotive storytelling, The Glow Worm is well worth a read. Look out for future projects from Barbara, with works on Henry James, ghost stories and Renaissance Venice rumoured to be on the way soon.

You can read Barbara Mercer’s story The Glow Worm here.