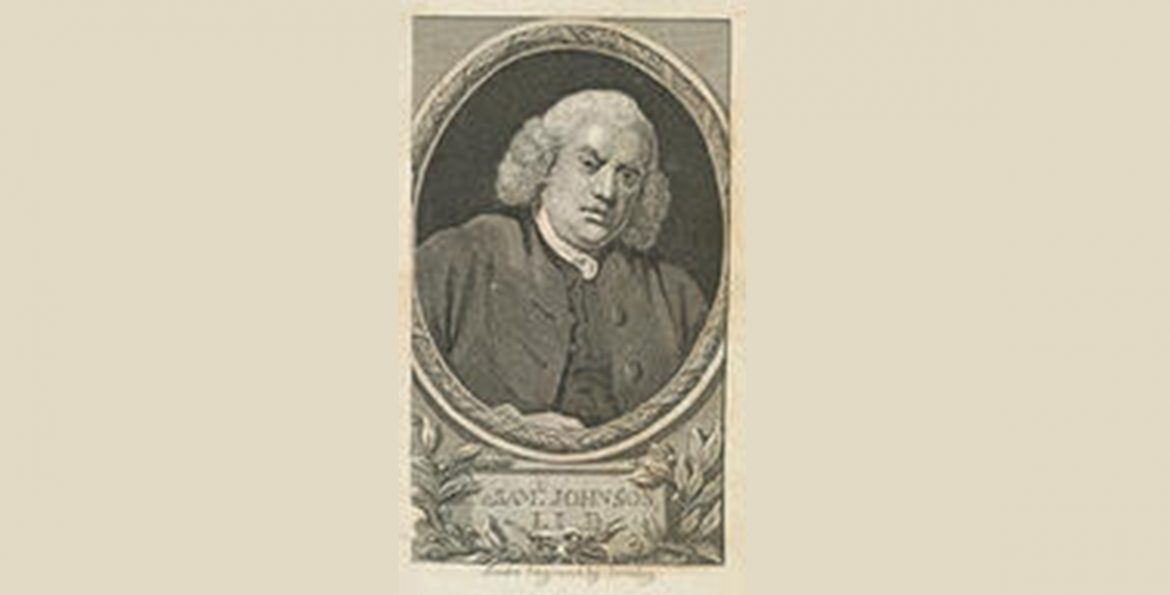 Yesterday, September 18th, was Samuel Johnson’s 308th birthday! In honour of this revolutionary lexicographer we decided to take a closer look at his famous and occasionally humorous, ‘A Dictionary of the English Language’, first published in 1755.

Not only was Johnson’s dictionary far more extensive than pre-existing attempts, but he was also the first lexicographer to include literary quotations. With more than 114,000 quotations, Johnson was able to explain the context of a word’s usage and vastly improved the comprehensibility of the definitions. Future dictionaries were greatly influenced by this innovative approach as evidenced by the example sentences in modern dictionaries.

Although the sentences found in dictionaries today are certainly useful, they do lack the personal touch of Johnson’s literary feat. He only selected quotations from literature he held in high regard such as Shakespeare and Milton. It is interesting to see his literary tastes reflected in his work but even more fascinating are his definitions.

Although many entries remain professionally academic, Johnson did receive some criticism for occasionally allowing his humour to bleed into his work. In fact, he almost faced a defamation lawsuit over his definition for Excise (shown above) which the Commissioners of Excise did not find amusing. Johnson was given the opportunity to alter his definition. He refused, however, strangely enough, no legal action was ever brought against him and the original definition was published in later editions.

A range of unusual and complicated words can also be found in Johnson’s dictionary. It seems that the more complicated the word the easier to define, such as; Odontalgick: ‘Pertaining to the tooth-ach.’ It was the simple everyday words that Johnson struggled with. He was one of the first lexicographers to make an attempt at defining these words and he certainly made a good effort. Particularly for the word ‘take’ where he listed a hundred and thirteen definitions.

Of course, as extensive as Johnson’s dictionary was, there were some ‘improper’ words he simply refused to include. In another reported display of his wit, although the exact words are debated, when two ladies expressed their admiration for Johnson’s omission of improper words he replied ‘No Madam…I find, however, that you have been looking for them.’

Interestingly it was a group of London booksellers who teamed up to commission the dictionary from Johnson. They saw the need for an extensive and comprehensive piece of work that would help regulate the English language. Johnson felt similarly and in the dictionary’s preface he wrote:

‘When I took the first survey of my undertaking, I found our speech copious without order, and [energetic] without rules: wherever I turned my view, there was perplexity to be disentangled, and confusion to be regulated; choice was to be made out of boundless variety, without any established principle of selection; adulterations were to be detected, without a settled test of purity; and modes of expression; to be rejected or received, without the suffrages of any writers of classical reputation or acknowledged authority.’ [Excerpt from the Preface (A2r) source: Glasgow University Library Special Collections Department]

In Johnson’s project plan, he estimated that he would need around three years to complete his dictionary.

It took him eight years and six assistants to complete the first edition of ‘A Dictionary of the English Language’. Although this was almost triple his expected time frame it’s actually still very impressive. As noted in an article from the British Library, ‘the comparable French Dictionnarre had taken 55 years to compile and required the dedication of 40 scholars.’ So while Johnson’s dictionary was almost six years late, it’s incredible that he and his small team were able to finish it at all.

Although every great work has its critics, on the whole, Johnson’s dictionary was highly regarded and very popular. He became quite famous in the literary world and led a fascinating life.

For those of you intrigued by the life of this famous lexicographer, writer, poet, husband and pseudo-father, I highly encourage a visit to his house in London. Having gone myself last year I can promise fun facts, a chance to dress in a frilly-sleeved coat, and an extremely clever house design with a moving wall. The staff are incredibly knowledgeable and friendly. Or, if you prefer, the Ye Olde Cheshire Cheese pub around the corner was often frequented by Johnson and has a beautifully old-fashioned feel and charming ambience.

If you’re interested in literary geniuses we have the perfect short story for you. The Brief Literary Career of Lewis Burgess tells the tale of a extraordinary writer who was also struggled with fragile health and had a great talent for words. The only difference is Lewis Burgess doesn’t actually write. This story will take you on an unexpected journey that’ll keep you guessing till the very end.

‘Lewis Burgess was a literary genius, of that there can be no doubt.  It might strike you as odd, then, that his work is so little known.  You may not have read it yourself.  It is even possible that his name is unknown to you.  How should we account for this seeming paradox, for the total failure of Burgess’s work to connect with an audience or gain so much as a glimmer of critical recognition?  We might begin our investigation on the bookstand of a typical news stall.‘ Read more…