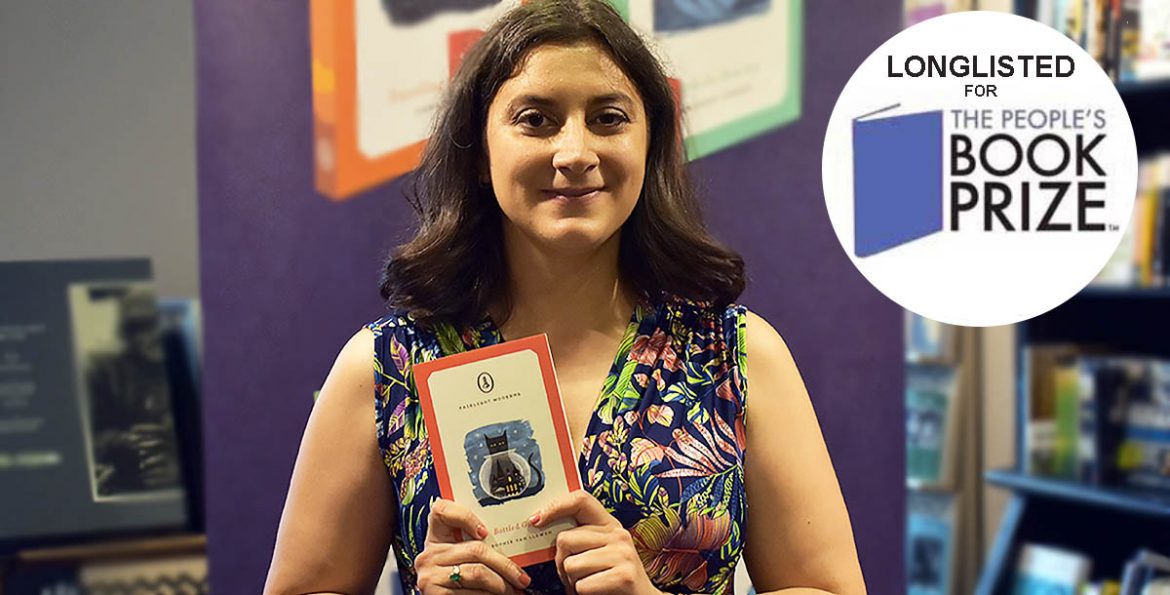 We’re very excited to announce that Bottled Goods by Sophie van Llewyn has been longlisted for the People’s Book Prize! This award aims to find and promote new works from publishers of all shapes and sizes. The shortlist for this award is decided by popular vote so show your support by voting here.

To celebrate this we’ve interviewed Sophie to find out how her writing career began.

How did you start writing? Did you begin with short stories and flash fiction or were your first forays into the literary world novel length?

The first thing I wrote after I decided to take up writing again, three years ago, was a novel. I really did finish it. The problem was, I didn’t know where to begin editing it. It was a hot mess of a first draft and I had no idea how to make it better.

At about the same time, I discovered flash fiction through AdHoc Fiction — they post weekly prompts, and the longlisted stories are published on their website, followed by a public vote. It was a huge boost for me that the first flash fiction I ever wrote was longlisted, and a very rewarding experience. Through AdHoc Fiction, I got to know more about this fascinating form, about journals that publish it, and other people in the flash fiction community, which proved to be immensely supportive. It meant a lot for someone like me — I live in Germany and write in English. An online community was just what I needed.

Has writing flash fiction helped you as a writer?

A lot! I discovered editing and self-editing by writing flash fiction. Because the form requires the piece to be tight, I think it makes it easier for a beginner to spot what works and what doesn’t. Also, it teaches you how to find the heart of a story, and how to get to it quicker.

But perhaps the most important thing for me was that through a workshop, I came to meet my current critique group. Christina’s, Stephanie’s and Kayla’s feedback on my pieces was crucial to my development as a writer. I could have never come so far without their support, and their keen editorial eyes.

How did Bottled Goods take form?

I had this idea about a woman, stuck at the border for days on end, while trying to get out of the country. I tried to write it as a flash fiction, as a short story, as a novella, but it didn’t work. The story lost its urgency, or there was too much story to fit into a short form.

After I discovered the novella-in-flash, and after having researched the form for a bit, the story just began pouring out of me. Something clicked. And it was so fun to try and tell a complex story by using short snippets, sometimes varying so much in form (from diary entries, to a letter to Santa, instructions, postcards, a table, a story told in backwards order and so on).

Can you describe your journey to find a publisher?

I was initially planning to send Bottled Goods to the Bath Novella-in-Flash Award, but it ended up over the allowed word count. I could have cut all the magical elements. I thought long and hard about this option, but, in the end, I decided against it. So I started querying publishers instead.

But the novella-in-flash is such a new form, there weren’t many options for me, in the first place.

During a Mslexia Max event, I got to chat with Louise Boland, the founder of Fairlight Books. I pitched Bottled Goods to her, and she invited me to submit. I was exhilarated when I was asked for the full manuscript two weeks later. I was absolutely floored when I was offered publication. Fairlight Books was much more than I could have ever dreamed of — so wonderful to work with, so supportive of their writers.

Bottled Goods has been longlisted for the People’s Book Prize. How does that feel?

It was the most wonderful surprise! I’m really thrilled to have been longlisted. Bottled Goods is very special to me, because it’s about my native country. It depicts a realistic image of Romania during communism (in spite of the magical elements), and I’d love it if more and more people found out about the book, and read about Romania, as it was. Also, it’s a book about freedom — personal and political. I think in the current political context it’s more and more important to highlight what life was like under a totalitarian regime.

I’d be immensely grateful if the readers voted for my book.

You can vote for Bottled Goods here.

You can also read excepts from Bottles Goods here or buy it here.