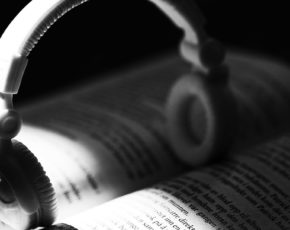 Books and music: name a more iconic duo. Some book lovers like to read with peaceful piano melodies in the background, while others make playlists based on the songs that feature in their favourite novels. Writers are often inspired by the music they listen to as they type away at their work in progress.

But as well as readers and writers taking inspiration and solace from music, musicians often draw on literature in their lyrics. Below, we’ve collected some examples of our favourite literary references in music.

Wuthering Heights by Kate Bush is a musical interpretation of the narrative of Emily Brontë’s classic novel of the same name. Watch the video for some 1970s drama!

‘Too long I roam in the night

I’m coming back to his side, to put it right

Let me in through your window’

Sigh No More by Mumford and Sons is based on a song from Shakespeare’s Much Ado About Nothing. You’ll find plenty of other allusions to Shakespeare throughout the band’s catalogue.

‘Sigh no more, no more

One foot in sea one on shore

My heart was never pure

And man is a giddy thing

Oh man is a giddy thing’

The Dangling Conversation by Simon and Garfunkel references two great American poets as it tells the story of a couple who have drifted apart. The musical duo frequently allude to literature in their poetic lyrics, and Art Garfunkel also named his first solo album Angel Clare after the character in Tess of the d’Urbervilles.

‘And you read your Emily Dickinson

And I my Robert Frost

And we note our place with book markers

That measure what we’ve lost

We are verses out of rhythm

Couplets out of rhyme

Oh the world is okay

The water runs off your skin

And down into the drain

And drinking in the cafes’

Paperback Writer by The Beatles may not reference a specific book or author, but it does gently satirise aspiring novelists with big dreams.

‘If you really like it you can have the rights

It could make a million for you overnight

If you must return it you can send it here

But I need a break

And I want to be a paperback writer

Bonus books and music fact: the band Wolf Alice got their name from a short story by Angela Carter, published in her collection The Bloody Chamber.

Hopefully this post has given you some ideas for both your TBR pile and your playlists. Happy reading, and happy listening!

And if you’re looking for a book in which music plays an important part, look out for David and Ameena by Ami Rao, forthcoming from Fairlight Books – one of the main characters is a jazz musician, and the music that features in the novel is inspired by the work of the jazz pianist Aaron Goldberg.

All the King’s Horses