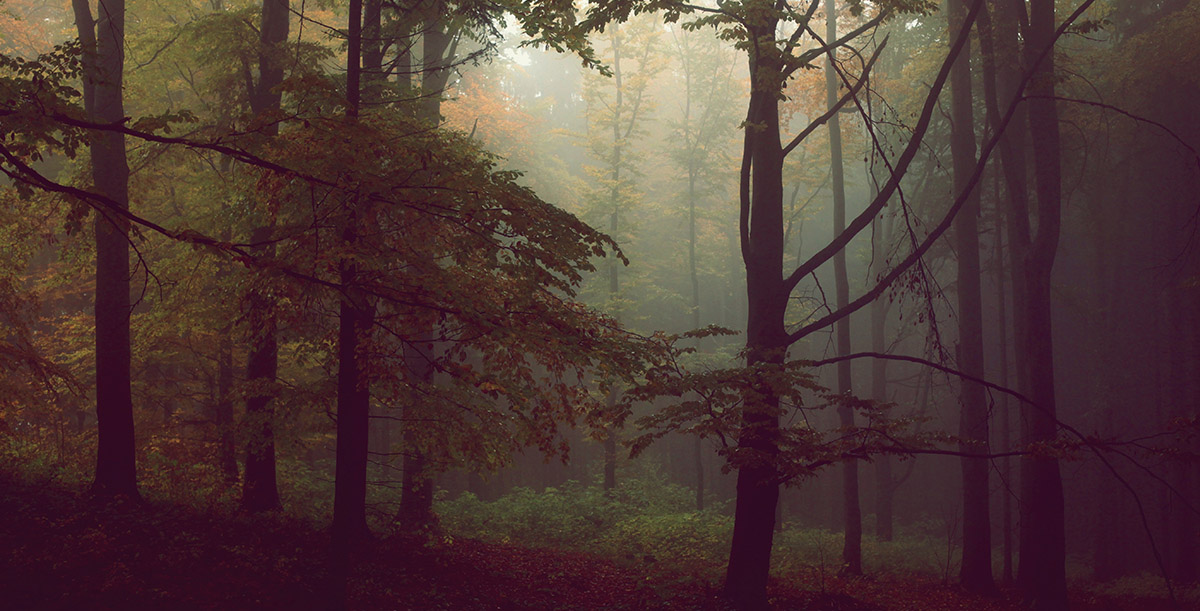 Strong boots stomp the tarmac and stop right next to Geoff and me. Wet leather and sheep muck leap up my nose. There’s a strange hand in my fur, big-fingered. I lick the palm – urgh, tastes of engine oil. And the voice that belongs to the hand shouts over the beast in the sky:

‘That missing girl… I saw her. About ten this morning. Trudging along the path between the end of my field and Carn Wood. Real slow, staring down at her feet. Looked just like that photo in your hand. What’s her name, Erin? Aye, she had that long red hair. Just fourteen? Same age as my own daughter. I thought to myself, now that one should be in school. But no bag. Nothing with her. Really looked like she was going nowhere.’

Geoff talks fast into his radio. The wood skulks up on the dark hill, branches shaking. Come on then, they say, come in and see what we’re hiding. Dare you.

But Geoff turns and strides, straight through the gate to the long house. And I’m right on his scuffed black heels.

The door flies open while the bell still rings. Her breath is loud and fast, like she’s running. There’s a silver Mum on the top of each slipper. Unravelling.

Mum doesn’t want me in there.

They tuck their voices behind the kitchen door. Hers is high and watery as she says:

‘A sighting? Oh, thank God. She’s ok, ok. Might walk through that door any second.’

Geoff’s words are calm. Hers heave and rock:

‘Carn Wood? God no… No, not that place… Where Alice… Yes, you know, her sister… Erin thinks she remembers, but she was too young, so young. We should have moved away, but I couldn’t, I couldn’t… Oh but what am I thinking, she won’t not have gone near the wood – she’s forbidden, she knows that.’

Geoff talks quietly. Then she says:

‘No, she doesn’t tell me what happens at school. I never know what’s in her head. Last week she kept singing some song… I heard it through her door. Over and over, like she couldn’t let it go… had to get it right. Then this weekend, just silence.’

I get up off the mat and have a good sniff at a sleeve slumped on the bottom stair. Right cuff limp and chewed. Smells of bottled flowers, dried ink, bus fumes, ripped-up leaves. All mixed up. And something else – I stick my nose in the air. Flakes of a girl. Left behind. Whispering:

I couldn’t do it. Stand on that stage and sing. They were all laughing, I could hear them. Laughing at me. I had to run.

A chair drags behind the closed door. Slippers pace the floor tiles, round and round. Mum says:

‘Look at that sky… I need to bring the washing in but I can’t stand that awful helicopter drone. It’ll be dark soon. How will she cope out there without me, she’s just a child. Surely she’ll be home soon… You’ll be home soon, won’t you, my darling? You’ll be home if you can.’

Those flakes zing up my nose: soft like dust, spiked with life.

I cried on the bus home. They all saw. Alice wouldn’t have mucked it all up like that. I’m nothing. Nothing. I’ll never be the star.

‘I should have seen it… her hair wasn’t washed this morning, her shirt was crumpled. She pulled away from me when I tried to hug her, didn’t look back. I shouldn’t have let her go, should’ve gone after her when I found her cardigan. She doesn’t like the cold… Oh God, she’s out there alone. She’s nothing with her. Nothing. I can’t stand it, I can’t breathe…’

Silence in the kitchen. The sky howls.

But not yet. He has to get on that radio of his again.

It’s dark by the time we’re good to go.

Geoff’s wearing his earth-caked wellies; the beast is quiet. I know what that means. It’s our search now. At last.

My lead comes off – that’s better. Shake my head free.

He fastens the bells and lights round my neck. ‘Ready to play, Scout?’

He sends me up towards the ridge. Nose-first into the wind. Light-pawed. Ferns skim my fur. Ah, stretch the legs, lick the night. Here I come, ready or not.

Geoff paces our spine, steady and straight. That’s Geoff. But I’m off. Away and back, away and back. Always back. And he’s watching me with his torch, like I’m the boss here.

Yup, just doing my thing. My collar shines red. Bells jangle on my neck. The song of this night game. Chase the wind, feel it build as I run. It knows I’m trying to make friends with it. But it’s playing hard to get. You’ll never catch me, it cries. You’ll never grab the things I hold.

Well, that stirs me right up. Just you watch, I shout. I’m on your tail. What tricks have you spun? I don’t know where you’ve hidden that prize yet, could be anywhere. But if it’s here, I’ll find it.

Back to his heels. Nope, I tell him, nothing there, trust me. He knows I know. Look over here? I’m on it, don’t you worry. And I’m off again.

That wind’s weaving through the ferns, leaping up the tall trunks, sailing into the sky. Leading me on a wild dance.

A fizz tweaks my nostrils and wheels me round, sharp. Hello? My tail springs up like a flag. Hang on. Nose in the air – sniff, sniff, sniffing. Tickles a bit. Can’t quite get it… almost, almost. Got it.

It’s her, the cardigan. A billion pieces of her drift here. Crying:

The world’s going on without me, I can’t feel it. But I won’t leave a gap. I’m too small and hidden.

Nonsense, I shout. I’m breathing you in right now. I call back to Geoff: We’re close.

You’re not alone. I’m in here too, giving that wind a run for its money. I’m on your trail.

I used to look at this wood from my window and wonder if Alice was still in here. Today it was so quiet and dark, I didn’t want to stand on the edge anymore. A little voice said: It’s better in here. But I don’t know these long shadows and I can’t see the way out. I’m lost, just a ghost like Alice. But no one will find me. I don’t shine as bright as her.

The wood is full of you. I’m going to find you, pull you out. Then I’ll do the winner’s dance.

Go, go, go! I smash into the night. Off the rail now, far from the torchlight. Ferns fly in my face as I bound up to the ridge. I’m boiling, stick my tongue out to cool off. Where are you, where are you?

Someone is coming. Closer and closer. She’s with me now. But I don’t want to be like her anymore. I don’t want to be a ghost. Go away, go away. She’s behind me, I can’t see her. But I know she’s there. Stroking my hair, and saying in a little voice: There now, my sister, there now.

The wind shrieks, She’s mine! And snatches her off. I stop. My nose feels dry. I don’t know which way to go. It’s all muddled up.

The torch is small behind me. Watching. He still thinks I’m leading this game.

No chance. Been chasing the tail end of something. Old scent, must be. Lofted up and stashed at the top of this ridge. Stuck between the fern fronds, tangled into the branches. She was here once, but she’s been blowing about this place for way too long.

Told you, spits the wind. Told you I’d win. I’m the boss here. I’ve been up to this all day. Spinning and brewing. You’ll never find her, she’s gone.

Geoff strides up to me, panting. ‘What’ve you found, Scout. Good boy, show me.’

Nothing, I say. Nothing. I hang my head. I hate this stillness. I need the bells in my ears again.

The wind cackles. Geoff scratches the fur between my ears as he pours water into my bowl.

He digs a plastic bottle from inside his search jacket, twists it open. Ah, good plan, Geoff, spot on. I slug my water.

He holds the bottle at arm’s length, squeezes it three times. White powder comes puffing out and hangs in the torchlight like a ghost on camera. Till the wind charges through it, stretches it thin, snuffs it out.

‘Aha,’ says Geoff, shining his torch on the map.

Yup, I saw it too. The path of the wind. We caught its sneaky dance. It’s blowing in behind us.

Geoff looks back down the hill. ‘What’ve we missed, Scout?’

He switches on his phone map and we stare at zigzag red lines.

‘Let’s see, good ground coverage here. But there’s a gap right there.’ He points at a hole in the red mesh, and a thin blue line. The river.

I growl. Couldn’t hear it. It’s been drowned out by the pesky wind.

I stand tall on the ridge and shout up to the flailing trees: The boss, you say? I’m the hero. I’ll win this game. You’ll see.

And I’m off, bells ringing. Fast down the slope, right up the nose of the wind. Down, deep down where water drags over sharp stones.

The river’s sunk low. Tree-roots poke out from the bank like bones. Cold air, dead still. She must be here. Must be.

I track the limping flow. Nose to the clouds. Ready to catch, ripe to be caught. My tail quivers. What’s that? A spark. And another one. A swarm. Hot like fireflies. That’s her. She’s snagged me again, she’s reeling me in.

Bright scent, pooled over the water. Getting brighter. I can taste it, could almost lick it up like a treat. Nearly… nearly… nearly there.

I leap the last bit, arch-backed, over and over. Take that, demon wind. I’m lit with the winner’s fire.

White face, closed eyes. Red hair tugged by the water – looks like rusty seaweed. I want to paw it out, but this game’s not over till the torchlight shines on her.

I race up the bank to the far-off beam. I run to Geoff, push my front paws on his chest. She’s over there, I yell. He leans over me, mouth smiling in a line, but his eyes aren’t. They’re searching the dark ahead. ‘Good boy. Show me.’

Back the way I came. He’s right behind me. I find her again for him. Here she is. Cardigan scent, mixed with soil and sweat.

I nudge her hand with my nose. Gently does it. Cold skin. She’s not moving. I try again. And again.

There’s torchlight on my face.

A siren screams. For me?

Mum leans low, stroking my hair and staring like she can’t take her eyes off me. She’s saying, ‘Oh my Angel, my Angel.’ Her cheeks are dripping wet. Her arms are around me. Just me.

The black and white dog is dancing with a rainbow ball. Bells ringing and ringing. He found me, even in the dark.

It was easy, I say. You were shining.