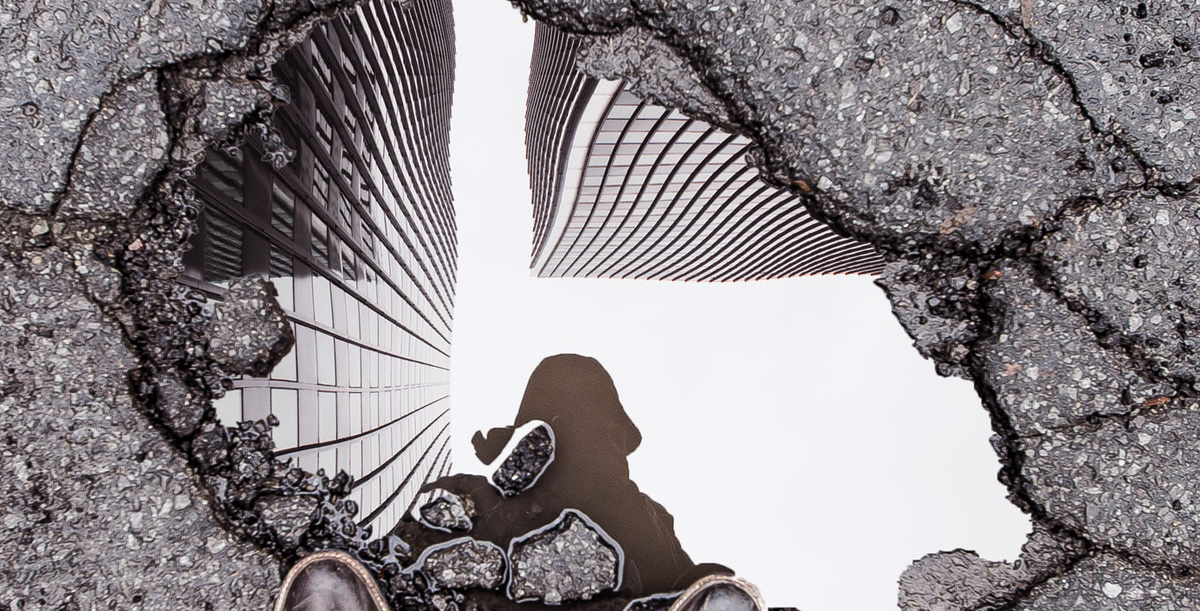 I once lost something of mine, and it was nowhere to be found. Problem was, I didn’t know what it was that I was looking for. I searched through my whole house: under the couch cushions, in the kitchen cabinets, under my bed. I rifled through countless documents − taxes, old schoolwork, art − in case a snippet of something, anything, had slipped in between the pages. I took a ladder to crawl in the attic, and anti-anxiety meds to creep into the basement. I dusted the furniture, mopped the floors and washed the windows. I got more desperate at one point, and peeled up the floorboards; it was like picking splinters from flesh: painful, tiring, fruitless.

I walked these halls with eyes old and new. I looked at photographs of everyone I’ve ever met. I turned those photographs upside down, sideways, tore them to pieces and reassembled them… Nothing.

I clung to light fixtures and ceiling fans alike, hoping to see the world from a different perspective. I dug tunnels beneath my house. I found hidden treasure, dead bodies, and many shiny pebbles lodged underneath my fingernails. I didn’t find what I lost. But I did figure out what I was looking for.

It happened when I sunk to the floor in defeat, surrounded by shreds of old photographs. I made snow angels in the mess, almost bored with my distress. The little bits of pieces of my history fluttered around, mostly forming nonsense, but once, just once, forming an unfamiliar face. I looked at the face for a long time. The face had an elegantly curved nose, eyes that laughed, and a smile that cracked (and not just because of the rips in the paper). I jumped up. Love! It was love that I was looking for. And that I certainly couldn’t find in my home, could I?

I had to expand my search. I ventured outside. Skyscrapers − modern castles − and the glare of the sun in my eyes shrunk me tenfold; the world was too big. But I had to try. I started in the alleyways first; love supposedly can only be found in the most unlikely of places. I searched in the dumpsters to find misplaced recyclables, body bags and the occasional racoon. It wasn’t what I was looking for. I tried kneeling down to peek through the cracks in the pavement. I found signs of plant life and small armies of insects with eyes that reflected my own peering face, but not much else.

I tried the main streets next. I skipped around, twirled my hair − anything to be noticed. People parted ways for me, like I was Jesus. But they weren’t what I was looking for. When it became clear the citizens of the street were not my style, I tried stores. I tapped on glass windows and jingled the bells attached to the door frames. I pushed my way past guards just to catch a quick whiff of expensive perfume or stroke a fuzzy shawl before being dragged out. I made sure to thank them as I left; that split second in their store was all I needed to decide that the person I was looking for wouldn’t shop in a place like that.

Soon I found myself slumped under a tree in a public park, salivating as much as the stray dog nipping at my big toe. Maybe I should have opted for sneakers instead of sandals. But what if the person I was looking for didn’t like sneakers? I sighed, and stared upon a colony of ants, the same type from the alleyway. Then, I remembered: the microcosm is the macrocosm. And my house was the microcosm; like then, I just needed a different perspective. A hundred bad dates make for one good one. But I already knew exactly what I was looking for. I figured if I surveyed thousands at once, the odds would be more than in my favour. I found myself shimmying up the wall, caught between brick and drain pipe. I made my way on top of the rooftops, where the city pigeons nest. They looked at me oddly, as I did them: I suppose neither of us expected the other to be here. The pigeons weren’t what I was looking for, but at worst we coexisted peacefully and at best they were a comfort. I kept climbing higher and higher, traversing sky-bridges between buildings of increasing magnitude − a metric which height fails to measure.

I ran from tiled roof to flat top to power line tightrope. I danced atop poles that reached the clouds. I followed the stepping stone path of the man-made metals of the sky. The world was my oyster. Yet, from so high above, I couldn’t see any fish.

I found myself climbing down from the sky, step by step, until I was on the ground again. I was not in the lowest of the lows, picking through the trash. I was not on my high horse, scouring at them all. I was right in the middle. And I was by a building that said ‘City Lost and Found.’

I walked into the building; I was lost, after all. The smell was sweet like flowers, with a touch of sweat. The walls were yellowing. The furniture was outdated but charming. The workers came fat and thin, old and young − held in common by their searching eyes. I was one of them, I realised, though I wore no badge nor received a two-week paycheck. I was getting closer, I could feel it. There was just something about this place − a convergence of worlds, a portal to my wildest dreams. I wandered through the bins of neglected stuff: sweaters, lunchboxes, a bicycle with the tires popped, a hammer, three street signs, socks, underwear, sealed envelopes of unread love letters.

And in the middle of it all, I found it. I found what I’d lost, what I’d needed all along, what I’d thought I had but never really did: the person I was looking for. And they were beautiful. They had long brown hair and deep brown eyes and clear skin and dimples and thick brows. At first, we just stared at each other. Then, I smiled. They did too. How had it taken so long? Had it only been a day? Or had it been months? Years? How long had this empty hole inside me been allowed to fester − grow moss, foster worms. Surely they could plant seeds in my rot, bring beauty to what was not.

My steps lengthened, legs suddenly burning from my crawl through life. My fingers stretched outwards, groping. I wanted to touch them − touch their face, their chest, their back. They must have wanted the same, for they seemed to be running towards me as well. I was ready to fall into their embrace. But, instead, I slammed into a wall of sorts. ‘What the…?’ I stuttered.

I glanced around, head spinning like a globe whacked by the hand of an unruly child. Something was wrong. I stepped back. I looked around. I narrowed my eyes, and reached out a finger. A plane of glass. A mirror. My mouth twitched upwards. ‘Oh.’

I stood there for a minute, pensive. My reflection stood there too, staring back at me with the same baffled expression. I tapped the mirror with a scrutinising finger. It made a dull clang. I traced my own features reflected back at me, memorising forgotten curves. The lost and found staff grazed me like seaweed. I felt like a ghost. I was wrong; not only was what I had been looking for in my house all this time, I’d never lost it in the first place. It became clear that there was nothing for me at the lost and found. I had everything I needed. I took my time going home, scouring the alleyways and the rooftops. The ants marched in a frenzy around my toes. The pigeons found roost on street lights, watching me. I wondered if the ants and pigeons knew all along.