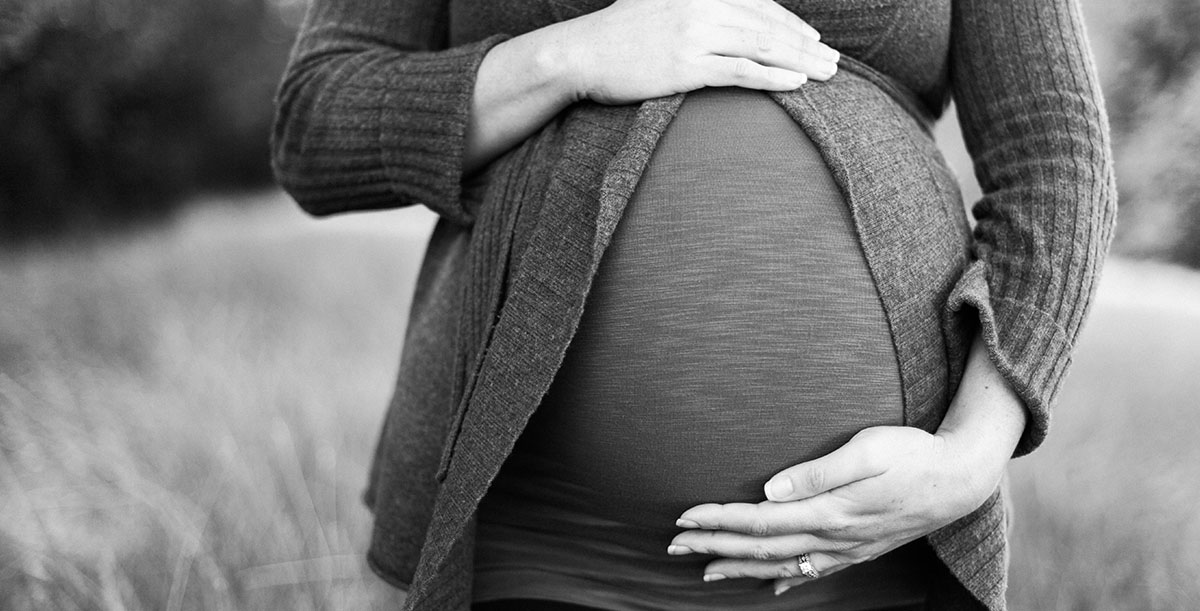 A well-aimed kick winds her; gasping, she bends double.

Late afternoon, deep-dark February, and on the snaking branches of the common limes outside, snow sits tight, a vanilla crust ready to drop.

She knows it won’t fall. There’s not a breath of winter wind. The air, it’s freezing.

Another, insistent kick, a dense heel to her soft stomach, and now her belly is a Wurlitzer, the baby zealous for thrills and spills.

She spreads the slim fingers of her left hand, square-tipped, across her sweater – knit-one, purl-one, she made it herself. She hasn’t lit the side lamps in the front room, barely registers the scarlet of the wool stretched tight these last few weeks. The streetlamp casts sodium yellow tints, but she only sees the sails of the ship billowing across the window, emerald and navy glass turning red to rusty blood.

Blood. She won’t think of that. She’s been fretting all afternoon. At lunchtime, she’d pressed the contours of the telephone too hard against her pale cheek. A mark remained. She’d seen it in the crescent hall mirror.

‘You’ve two weeks to run. I’ll be back.’ Her husband was matter-of-fact.

‘I don’t want it to…’ She can’t tell him about that smear on the toilet paper.

That was no comfort.

All afternoon she’s moved so slowly around the chill house, her right hand gripping tight the ebony bannister, belly heavy as sand. Upstairs, she trawled a turquoise vinyl vanity case from under the bed. No need to pack. It was already filled – two nightdresses, pink-sprigged, a new hairbrush, a scarlet lipstick. ‘Don’t let yourself go,’ her mother had whispered, standing shoulder-to-shoulder at the department store. ‘He’ll be off if he can’t, you know …’

In her armchair, she winces. The mayhem of the baby fills her with terror. She thinks of the narrow, silky channel her husband enjoys week in, week out, even now. How it may stretch a little, when she pushes her wedding-ring finger inside, on secret moments alone. How can it gape so wide for a baby? Nausea rises, sweet and sour. She’s hoping for a tiny infant, six pounds or less. But perhaps she’ll get a bruiser, a boy, a male…

His voice, it’s in her head. He’s so sure and she must believe him. He’s mature, he’ll know. The baby won’t come this teatime, nor interfere with supper, won’t gatecrash with the worst manners past midnight. She’ll still be able to make his meal, warm the front room on his return, after he’s handed her the key to the shed where the scuttle lives. No panic. Her husband will come home. He only has to catch the tram, his mackintosh buttoned against the rapping cold, one restless hand on his Brylcreem flop of hair.

‘I’ll walk if the trams are stopped.’

Now his words float across the ceiling, patterns above her head. She shuts her eyes, listens. That snow. It’s been a noiseless threat all day, but she’s seen it, showering, piling high, slipping and tipping, in the streetlight a creamy ripple. Even the rose bush on the front lawn has disappeared, even though it was frilly and succulent in early autumn – after the honeymoon.

She pulls a shawl from the back of the grey armchair, wraps it tight. Her hands press lightly on her belly. ‘Hush baby.’ She breathes in and out. Hears the vanilla crust give up its fight outside, splintering in a powdery rush.

‘You’re getting fat. Too much sitting around, all that revising for ‘O’ levels. Get outside, play tennis. Go swimming.’

She sits motionless at the kitchen table, watching her mother’s back, the way her floral dress digs in at the waist and splays out, one flimsy layer above her girdle. Like a lampshade, but not so elegant.

The glass of strawberry milk, circled in her hands, tastes like soap. She runs her tongue around her lips, dry throat, tongue clicking.

‘Fruit for pudding, my girl, no more ice cream.’

She doesn’t know how to tell her mother what she’s done.

What happened in the bushes behind school, the day the exams were over and they were cock-a-hoop, every one of them.

‘You can’t get pregnant the first time. Virgins can’t.’

She’d smelled his lemon-pop breath in her face. She’d believed him before, during and after, but not later. Now sickness arrives every morning of every day. In her bedroom mirror, her stomach strains above her white cotton pants.

‘You’ll stop being sick now exams are over. It was nerves, that’s all.’

Her mother turns, gazes with a smile. Her lips are the colour of cherries, but her eyes, they don’t smile. The daughter sees fear, and a question, but she needs to ask one herself.

There’s a bang as her mother slams the door.

Finding a willing husband, it hadn’t taken long. After she’d blurted, been spied head over the toilet, her mother fuming at the open bathroom door, her parents had gone quiet, too quiet. Then it was over.

‘He’s a respectable bachelor who doesn’t mind taking on a young wife.’

Her mother rubbed her lips, so hard the cherry stain slipped to flesh. They’d faced one another over the walnut coffee table. Her mother held her chin with hard fingertips.

‘Should have thought of that before. You need to be married. That’s all.’

The bells pealed after their vows, and she’d looked down at her tiny dome, encrusted with lacy flowers. Her husband – ‘David darling’ her mother called him – took her hand. His skin was moist; he only looked at her sideways. At that first dinner party, he’d dabbed his lips after each mouthful. She’d tried to smile nicely.

Instead, tears plopped onto the chicken chasseur and pear upside-down tart, swimming in custard. No cheeseboard.

There were no photos outside church; the vicar had been briefed, slipping away, a flash of monochrome robes. She didn’t mind. ‘David darling’ opened the door of his car, tucked up her point-toed shoes. He revved the engine loudly, staring straight ahead. She strained forward, gasping at thick, warm air, to catch her mother’s eye. She saw only her father’s face, flushed and crumpled.

‘He’s a good man, your dad,’ David said, foot on the gas, out of the church gate, hitting open road. Pressing a warm hand on her knee. A squeeze.

She retched on the grass, peat brown from too much sun.

Staring straight ahead again as he drove faster.

She was perspiring so hard, her body was drowning in sweat and shame.

Now she stands at the window and presses her cheek against the leaded lights. Exhales one after another, jagged sighs. It is eight o’clock and he’s not home. She has eaten nothing all day and inside the front room, with no fire to kindle, coal locked in the shed, it’s freezing. Imperceptible frost melts beneath her fingertips. Her belly is on fire.

Pain is circling, the baby’s in a frenzy.

Outside, she fixes her eyes onto the suburban street. The common limes are a whiteout, there’s a blizzard. She’s rung his work telephone, but no one picked up. She’d shut her lids then, picturing his teak desk, the plump secretary in lemon yellow crepe, a large clock on the panelled wall. No chance of missing the correct hour, his home time.

‘I’ll walk if the trams are stopped.’

She exhales slowly onto the windowpane. A month has passed since the temperature plummeted below zero. In the local paper, photos of tiny icebergs on the river; the park lake frozen and children skating on it, precarious.

David has bought snow galoshes; he carried them into work in a carpetbag.

‘One night, they may stop the trams and I’ll have to walk home.’

Perhaps it’s tonight. But she needs to go to the hospital, she’s sure the baby is coming.

She won’t telephone her mother; can’t.

‘Now you’re a married woman, you’ve a house to run. Your father and I, we’re busy with the church, with work. Come for Sunday lunch, every third month.’

‘You’ve made your bed – now lie in it!’ She’d screamed it once, before the wedding, after too many G and Ts, and those little blue pills.

Even so, her mother wouldn’t want her first grandchild arriving in panic. Would she?

She picks up the phone, dials slowly. Her stomach rigid, a sharp ripple searing, someone pulling a belt too tight. Surely the baby can’t breathe?

‘He’ll be back. Babies arrive late, so have hot milk, go to bed.’

Her mother’s voice recedes, straining away. She waits.

‘You’re a woman now: a wife, a mother almost. No good running to me, not after…’

Out, she needs to get out, down the path, through the gate, knock on a neighbour’s door. But there’s a sharp kick now, bending her double, felling her to the hall floor. She repeats to herself. ‘David is a good man. He’ll be home soon.’

She retrieves her coat from the peg, eases it over rigid shoulders. Sinks to the step, pulls on her school wellingtons, black rubber. Her ankles are swollen, they barely fit, pain swooping down to her calves. She puts her hands on her knees.

Opens the front door, the snow flares into her face. She pockets her keys and one hand grasps the vanity case. The vinyl is grey now against the silvery snow. It’s so heavy. Puts one foot forward, then the next, snow flings into her boots. It’s so deep, too slippery. Nearly there, down the path, almost at the gate.

Above, all bleached and silky, multiple flakes career down, disorientating her.

Pain unleashes in her belly, she’s losing her balance. Slips, cracks her head.

David is unable to make it home. The trams have indeed shut down. His snow galoshes sit in the carpetbag beneath his desk. It’s been so much more convenient to walk to the hotel in town, a bar, the whisky slips down a treat. Later, he’ll call his wife.

He’ll remind her, when she mentions it, all over again.

‘Top up?’ he leans forward to ask his secretary. She’s splendid in purple wool and a slippery smile.

At ten o’clock, he telephones the house. It rings over and over, no reply. David is puzzled, then relieved.

He smiles at his whisky, conscience salved.

On the path outside his house, the blizzard gently covers a new mound, lying motionless. There’s a trickle of scarlet. The baby shifts and pushes, desperate to be born.