Turn The Big Light On 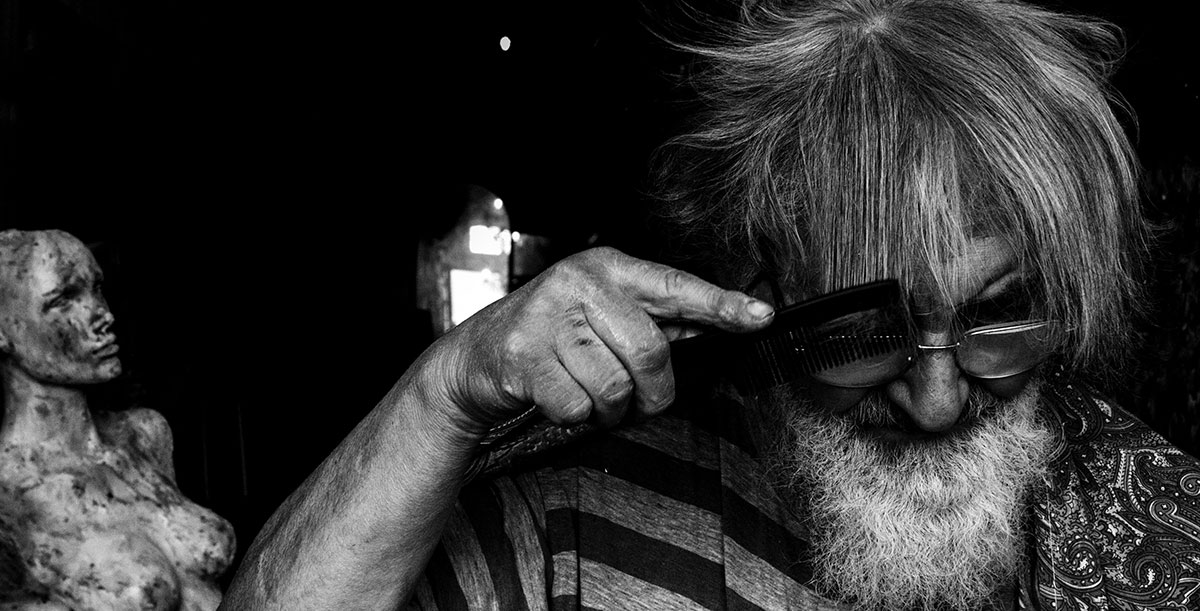 Uncle Bubbles was a small and sinewy man, known around the village for wearing hobnail boots in all seasons. I had overheard the rumours – at mass, in the corner shop – that he had webbed feet and that was the reason; but anytime I challenged my mother or sister about it, they would only smirk and ask have you ever seen his toes? When I said no, they would say well there you are then – which left me none the wiser.

I once listened to my sister, Maria, describe him as crazy because he carried a secret hunting knife tucked into the waist of his jeans. But I saw nothing wrong with that. If anything, it put an idea in my head that someday I might carry one of my own. She didn’t care for the way I shrugged at her then, so gave me the stink-eye and said, ‘Everyone knows that Uncle Bubbles is crazy. Everyone except you.’

Aside from the stories – like that time he punched a cow and knocked it unconscious, or that terrible winter when the lake froze over and he drove a car out onto the ice, windows down and radio up full, smiling and yoo-hooing – there were things about Uncle Bubbles that I wasn’t supposed to hear. For instance, the night I stopped outside the kitchen door to eavesdrop on my mother talk about that time they electrocuted his brain and how the mind was a complicated thing and how before that Uncle Bubbles had never spent a day in hospital in his life and that he was as hearty as a wild duck.

After mother died, the last thing Maria and I expected was to be separated, but that is how the world turned. She got sent to Cork, two hundred miles away to live with an aunt we’d never heard of, and I ended up moving in with Uncle Bubbles because I was younger and they didn’t want me to have to move school at such a critical time in my education.

Things deteriorated quickly then, and I can see now that for sure, it was my time to go off the rails. There were fights – which I usually won – and all sorts of mischief that I sought out; including the Gardaí arriving at the door to issue me a first, and then a second warning for lighting fires.

But the day that everything headed for hell, was one Thursday afternoon when I arrived home with a bad report card and a gash on my forehead that was borderline needing stitches and patched up as best as the school nurse with the mole on her face could manage.

Uncle Bubbles sat unshaven in the beige recliner with the dark wooden armrests, watching horse-racing on the television and drinking something from a mug. I came in and sat down on the sofa and looked from him, to the television, then back to him again.

He had these steel-grey eyes that if you didn’t know any better, you’d say were psychopathic; but holding his gaze long enough also revealed an infinite mischief, bubbling in the blacks of his pupils.

He was mesmerised by the race, his fingertips tapping the armrest in time to the horse hooves. As the commentator grew louder, talking faster and faster, it was suddenly over and a settling came over the television.

‘Ya bollocks!’ He flung an arm in the air, then drank from his mug. ‘What happened to you?’

He left the room and came back in. ‘Did you win?’

A couple of minutes passed before he returned and I had begun to grow uncomfortable, for Uncle Bubbles was an unpredictable man. He set down a bottle of vodka along with the dishcloth that was once white, but now grimy grey, then sat beside me. ‘Let’s have a look at you.’

He ripped off the nurse’s dressing and I let out a yelp. For a moment, he studied the wound and leaned in close. His breath smelled of something burnt. I wondered about that time they had electrocuted his brain and how they went about such a thing.

He opened the vodka and took a mouthful, swirling it around his mouth until I saw the Adam’s apple bob in his throat, then held the dishcloth to the rim and tipped it upside down. When he clasped the cloth to my forehead, I tried to back into the seat only to find nowhere to go. The pain burned and felt cold at the same time. He began to rub the wound. He was not gentle, but he was thorough.

‘Right, let’s see now. Hold still.’ His eyes narrowed. ‘It’s not bleeding, so let it breathe for an hour. You might need stitches. Might not.’

My breathing was unsteady.

He nodded. ‘What’d you hit him with?’

‘Good lad.’ He got up and took away the vodka and bloody dishcloth. My forehead ached. I was afraid to touch it.

He came back in and sat down. ‘Don’t touch that wound, you hear me?’

I felt dizzy. I felt sick. The pain was like my skin could scream. I thought about the report card and how best to bring it up. I wanted to go upstairs, but wanted to get it over with; so I fumbled in my bag and held it out to him. ‘Got my report card today, Uncle Bubbles.’

He took it and looked at the front a moment, then opened it up. First, his lips pursed as though he were about to whistle a tune, then his head tilted to one side. He swallowed twice, then grunted and cleared his throat. His eyes blinked too quickly. His jaw tightened. His eyes narrowed. He stuck a finger in his ear and wiggled it, before finally setting the report card in his lap.

‘Turn the big light on.’

Even though it was daylight and I hadn’t known Uncle Bubbles to ever need help reading his newspaper, I obliged.

My heart thumped. I wanted to touch the wound. As I waited for him to say something, he lifted his shirt and took out his hunting knife. It was different than I had imagined. The handle was black and decorative, with a matching leather sheath. I had pictured rows of human teeth, some animal fur and bloodstains. He unsheathed it and drove it hard into the arm of the chair, splitting the wood.

It stuck firm. It was vertical. The blade was long and silver.

‘Have you ever heard of death by a thousand cuts?’

‘A form of Chinese torture. If you do something unthinkable, they tie you to a wooden post and the executioner goes to work with a knife. Some say the aim is to inflict as many cuts as possible, but still keep you alive. Just imagine it. Imagine that cut on your head, how sore it is. Imagine that all over your body.’

He tugged out the knife. He stared at me. I could not find the mischief in his eyes.

He drove the knife into the chair again. ‘What do you think of that?’

‘Dunno.’ I reached up to touch my wound, then remembered not to and dropped my hand. I couldn’t believe he was wrecking the recliner, his favourite chair.

‘You don’t know. I told you to imagine it.’ He pulled out the knife and offered it to me. ‘Here.’

I was afraid to touch it, but I did. It was heavy.

‘Try to imagine. Look at the blade.’

I started to cry. It was then that the throb began in my forehead and I could imagine what the electricity felt like.

‘Now listen to me and I’ll keep this short and sweet.’

I tried to hand him back the knife.

‘You hold that! And listen carefully. No more fighting.’ He stabbed a finger at me. ‘Do you hear?’

‘Good lad.’ He eased back into the chair. ‘You’ve learned how to fight, now learn to walk away. And no more bad report cards. From now on, you keep your head down and you work hard. Understand?’

‘Right, away you go and make me a cup of tea and make yourself one, too.’

I stood up and handed him the knife. ‘I don’t want one. I don’t drink tea.’

‘You’ll drink it today, you’ll do as your Uncle Bubbles says.’ He took it and held it.

I made it as far as the door.

‘And this weekend, we’re going for a drive.’ I rubbed my eyes with a sleeve. ‘A drive. Where?’

‘Down to see your sister, in Cork.’

‘Two sugars for me, take two yourself.’