The Three Wives of Billy ‘the Bandit’ Cooper 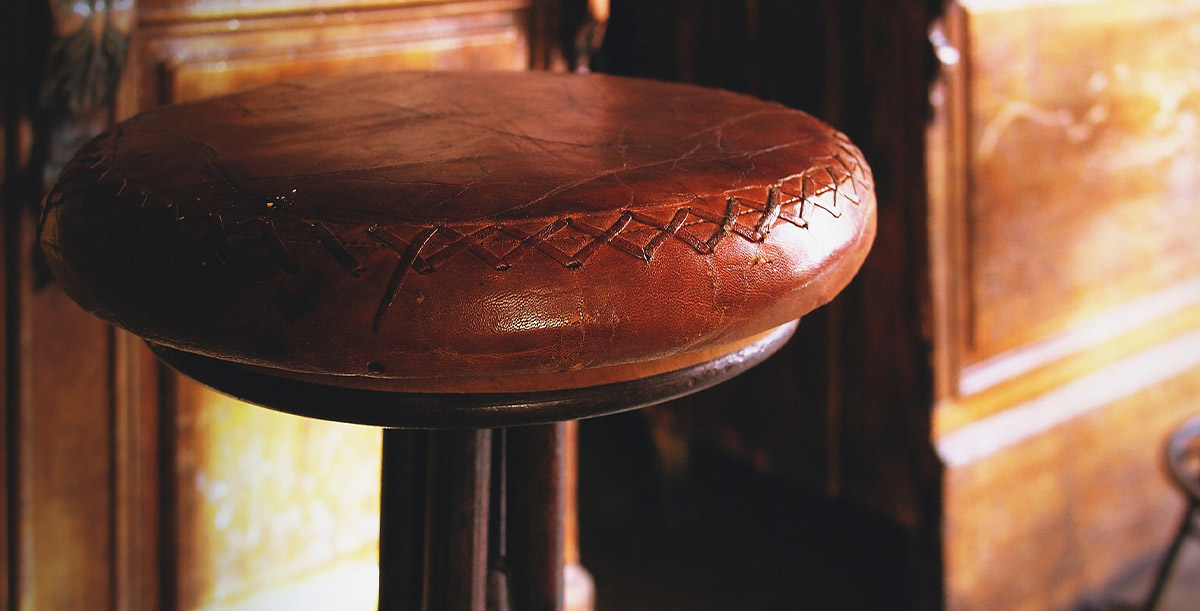 Before the drink got him – and shook him, and shook him – there was nobody west of the Mississippi that played the mouth harp like Billy Cooper. Friday nights at JJ’s Bar & Grill you couldn’t shift him from his stool, even if you’d wanted to. When Billy settled in his spot just to the side of the small stage they still have there, nobody shifted anything.

He’d lumber up to the front of the bar, wheeling himself from side to side, the way you might move a heavy barrel. Thick, woollen trousers pulled up towards his chest by a worn pair of braces, bulged up and over a belly grown large on JJ’s home fries, beer and bourbon.

Jeanette used to say, ‘If I wanted him dead, I’d have him poisoned in no time.’ But she’d be smiling as she said it, complicit.

Jeanette ran the numbers in her neighbourhood, and a half dozen others besides, and back then everyone at JJ’s played the numbers. Billy played daily.

‘Okay, Billy honey, what have you got for me?’ she’d say. And Billy would run through that day’s list.

‘That’s it?’ Jeanette would say. ‘Alright, no problem. You want that on the Detroit track too, or just Pontiac?’

‘Let’s do both,’ Billy said. ‘What do you think, they sound lucky?’

‘They sound perfect, honey. Now you take care. Talk to you tomorrow.’

And that would be that. Just business, for months. One day, Billy thought he should be bolder and when Jeanette asked, ‘That’s it?’ he replied:

‘Billy, you know that don’t make any sense. What’s that now?’

‘That’s my phone number, Miss Jeanette. I don’t mean to be forward, and if you don’t want, then I don’t mean nothing by it.’ Billy spoke calmly. ‘But if you think it would be a nice thing to do then I’d love to buy you a drink some time.’

‘A drink?’ said Jeanette and paused. ‘Who do you think I am?’

Billy tried hard to hear whether there was a smile there, and decided it was wise to assume nothing.

‘I think you’re a fine lady, and I don’t mean to offend,’ Billy replied. ‘I have your number. I call you every day. I’m just sayin’, if you want to call me one day, well, that would be wonderful.’

And he did, and Jeanette said nothing. For another week, more, just taking the numbers, same as every other day. It was something of a surprise, then, when the following Friday, Billy took a call from Jeanette.

‘Make it two. And tell me where we’re going,’ Jeanette said. ‘I’m bringing a friend.’

‘It’s Friday night – we’re going to JJ’s, of course,’ said Billy, and he hung up the phone.

And that’s how it was then for a dozen years more. Billy and Jeanette. Billy played the harp, Jeanette ran the numbers, and they had Friday nights at JJ’s together.

He performed every Friday night. When things got crazy, he’d be there most nights – but Friday nights were Billy’s nights and whether he was first or last on, he gave everything of himself.

His bulk hung over the thin cushion as he lowered himself onto the stool; seated, his own legs hiding those of the stool, he gave the impression of somehow supporting himself, crouched in mid-air.

Wedging the harp between his thighs and taking a quarter bottle from a back pocket, he’d take a swig before splashing some on the harp, rubbing it along the ridged edge of the mouthpiece.

The crowd silenced, and settled – against the bar, against each other, facing the stage where Billy now sat.

This was his crowd, and he knew them. He’d worked them for nineteen years – their fathers, their mothers, as well as the passers through. Holding the harp in his right hand, left arm hanging uselessly at his side, his eyes rolled back in his head as he howled the first few notes out towards the crowd.

That howl – vital and wrenching – came after Martha. It was the noise he made, that grew upon him, as he realised his mistake.

Martha had been coming to JJ’s since she was nineteen, drinking beer, listening to the music. She started to clear some tables, to wash some glasses. She was strong and took deliveries – rolling the barrels down into the cellar and tossing the empty ones up each week. She helped with the bar when it got busy, and eventually, she stumbled onto the payroll. She added a small white apron, tied around the waist of her blue jeans.

When Jeanette died, she – and everyone else – watched Billy begin to crumble. She poured him some drinks, served him some food. She knew wounds healed better in the open and didn’t avoid him or the subject of his dead wife. She didn’t look at her shoes or polish the glasses more intently when he got melancholy. She kept the drinks coming and talked, and he found comfort away from the platitudes and the niceties.

‘You want some help with her clothes?’ she said to him one Friday. About three months had passed.

‘With what?’ Billy didn’t know what she meant.

‘You know, Jeanette’s clothes,’ Martha said. ‘I can help you clean out the closet if you want. Gotta be done sometime.’

She came over that weekend with a roll of black bags, and spent half an hour emptying a closet and having a drink with Billy. She felt it should have taken longer.

‘Okay. I’ll throw the rest in the car.’ When she returned, she suggested going out for a drink, some other place. ‘Shitty day. Let’s draw a line under it.’

They went out and got joylessly wasted. They did the same the next weekend.

It became their thing. Martha would call Billy and say ‘Shitty day. Let’s draw a line under it,’ and they’d meet at a bar. Before long, it didn’t take a shitty day or a phone call.

They’d drink before work when she worked evenings, and after work no matter what the shift was. Billy worked off and on, flexible. He had five or six shows a week at that time, and a drink or two beforehand seemed to help the evening go a little smoother.

It took about a year before it broke down for good. Billy was at a bar with Martha. She didn’t remember when they’d started drinking. Billy had a glass tipped in his hand, liquor soaking his shirt and his head on the brass rail in front of his stool. She had been talking with someone and turned back to see Billy.

‘Hey Billy, how’s it going there?’

He grunted, although it wasn’t clear if this was in response to the question.

‘Hey, I think it might be time to get you home. What do you say?’

Billy spoke into his arm: ‘I ain’t going home.’

‘Come on, Billy, you gotta go.’ Martha pulled on his damp arm and his forehead banged against the bar with a dull thud. ‘Come on, I’ll drive you home. Let’s go.’

She managed to pull him to his feet, taking his weight as he leaned on her shoulder, staggering them both out the door. She poured him into the car, got herself set, and started off. She drove unsteadily, but without incident, across town to Billy’s apartment. She saw him into the lobby and onto the staircase. She didn’t help him up the stairs, but his apartment was only one flight up – he was home safe.

That night Billy had the stroke that left him with one good arm, and features that seemed to melt slightly down one side of his face. When he didn’t show at the bar the next two days, Martha came to the apartment. A neighbour told her an ambulance had been. She tried a few different places and tracked him down to the Henry Ford hospital on Grand. By the time she found him her tears had been and gone. She was cold, shaking and sweating. She stood staring at him for a long time. Tubes going in and out of places on his body that she couldn’t quite determine. There were small patches of blood on the back of his hands and he looked pathetic – outsized, helpless, like a giant baby in his shitty little hospital gown. She was crying again, but clear in her mind too.

‘I gotta go, Billy,’ she said. It wasn’t clear if he was conscious.

If you’d not heard him play before, the experience could come as a shock. The power, the energy. It was primal. His body trembled, his thick arm working the harp hard against his mouth as he blew and roared the sound across the room.

Yet it could be tender, too. The sharp noise would be tempered by something altogether gentler, more inviting. It was a trick, of course – utterly convincing, seducing you. And then, the switch. Back again to the sweltering wail that had first assailed you, found you in every corner.

The performance would swell and settle, burst and re-form, for over an hour. It seemed like he hadn’t taken a break, that he’d played one long piece without pause. Another trick, perhaps. Everyone in the room was left spent – Billy himself too, of course.

He’d press the harp into a front pocket and walk unsteadily to the bar, not acknowledging the applause that rolled like a wave on top of him, barely noticing the crowd at all, and order a pitcher of beer for himself and Tallulah.

She’d first seen Billy play a couple of years ago. Had heard of the big man who’d nearly died – had in fact been brought back from the dead with a mouth harp in his one good hand, and the devil in his lungs. She stuck around, for the shows at first, and then for the company. That she fell for him surprised Billy; that she stuck around surprised everyone. They’d met on a Friday like this, Billy drinking himself ready for the set, Tallulah leaning against the bar beside him, holding a bottle of beer.

‘You here for them country boys?’ Billy nodded over toward a two piece tuning up at the far side of the room. The early set. Tallulah looked at Billy, and then over in the direction he’d indicated.

‘The skinny runts? With the stupid shirts? No, no I’m not.’

Billy adjusted his waistband, laid his hand flat across his stomach.

Tallulah looked at him with the kind of lopsided smile that could go either way. ‘Why, I’m here for you, big fella,’ she said, and nodded at his one good arm. ‘You’re Billy “The Bandit” Cooper.’

That he was. Just himself. He looked at her for a moment and said nothing. And she came the next week, and again the week after that one. He started to take better care of himself – preparing to play for an audience of one brought some of his focus back.

Arriving before the show, she would sit at the end of the bar, Billy gathering his thoughts quietly.

At the end of the show she’d be quiet until he was ready. It could take a while for him to come round, and she knew not to intrude.

‘That felt strong tonight,’ he might offer, and they’d relax into an evening together, sharing a plate of fries and a pitcher or two. They’d end up stacking the stools for JJ as he locked up.

Billy still drank – but nothing from the top shelf. The bourbon now was only part of the performance, part of the legend Tallulah said he had cultivated. The bottles he had on stage were filled with black tea.

‘That’s what people want to leave with, you know,’ Tallulah would tell him, ‘a little bit of that legend.’

That always made him smile.