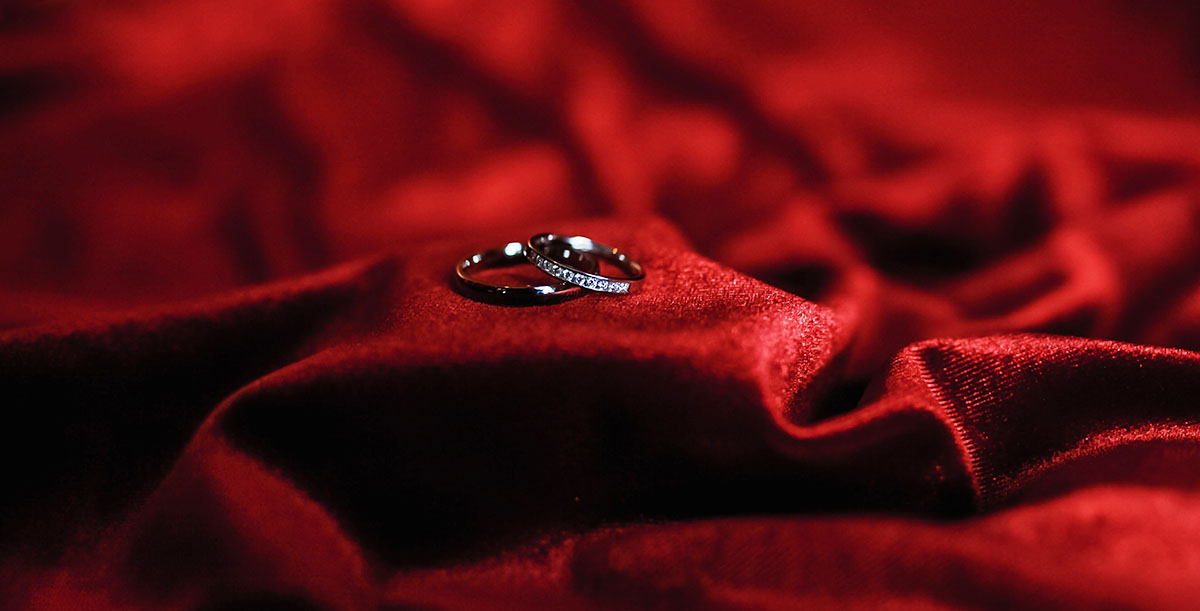 Three men asked me to marry them. I said yes to them all.

Vernon March whisked me to the altar in the month which matched his name. His courtship had soothed me like a breeze, flattered me into a flutter. I wore a green gown with a wreath of violets and primroses. They wilted nearly as fast as the marriage.

First of my friends to be seduced, I boasted about my man. Ah, that spring. What bliss to be young and alive and married to— But who was I married to? Vernon March might have come in like a lamb, winsome and winning, cuddling and gambolling. But gambolling metamorphosed into gambling, winning into losing. The spring-like charm, warm as an April sunbeam, dissolved into an April shower which shivered into a freezing deluge. No more cuddles. Rough winds would definitely shake such darling buds of May as dared to show their chilly pink noses. Mr March was elsewhere when I marched away.

Sonny Summers found me shivering on the beach. My springtime was long gone. I was alone, unwanted and past caring. Almost. But not yet ready to paddle into the sea with a pocket full of rocks. Not quite. Sonny offered what I most wanted from him: his name. Absurd and warming. A long way from chilly Mr March. We married on a different beach beside a gleaming ocean. I wore a yellow bikini with orange polka dots, under a transparent mantle of gold-flecked silk.

Home. Safe. Beautiful again. To be forever warm. Beach after beach, sea after sea, ocean after ocean. My eternal summer was beginning to fade, baked by relentless suns, scoured by swirling sand. Sonny treated me to boatloads of creams and treatments, lotions and masks. He treated himself to shiploads of ladies whose skin retained a spring-like glow without, it seemed, artificial aid. He was always generous but unremitting warmth became oppressive. I was burning out with the effort of showing enthusiasm for eternal life on interminable shores. Basking and volleyball, bathing, sailing, drinking. Taking my turn in the ever-lengthening rota of bed visitations. It wasn’t hard not to care about rivals. I simply didn’t. Have the energy. To care.

Sonny’s beams failed to fade when I asked for a ticket to ride. Anywhere. Preferably sandless. His attention was already bestowed on another shivering refugee. We parted with a hug. Warm. Naturally.

I fell for Mr Leif by mistake. Too old for marriage now. Too late for love – whatever that might be. Half my life gone. Nothing left. I gave up all thought of men. No more hope meant no more disappointment. No one had ever given me what I most wanted. Whatever that might be. I must fill my remaining days with useful activity. Become productive. I went to work. In a wood. In a country populated by trees. To be safe from people. From men and marriage. From longings.

My work was hands-on, hypnotic, hard. I grew to understand the growing trees, to recognise tiny changes, to care when a tree had been injured, to rejoice when a wound healed. One afternoon, I rested on a moss-covered rock with my back against a strong brown trunk. I stroked the bark, noticing its unusual texture, like velvet. I leaned my head against the tree and drifted into a doze. I woke when the tree shifted. My head nodded forward. The tree had… moved? I looked round. The tree had disappeared altogether. Or rather, had been transformed into a tall man in brown corduroy trousers and a camouflage jacket. He apologised for disturbing me but after an hour as my backrest, his leg had begun to cramp.

Mr Leif was the Wood Warden. He took me to his log cabin in a glade. We married without the aid of registrar or priest, holding hands in the grove where we had met. Gentle sunlight penetrated our canopy of leaves: scarlet, gold, cinnamon, nut brown.

Perfect. I had everything I could want. Nearly everything. In the autumn of my days, I felt mellow, quiet. Complete. Nearly. Except. I was sometimes lonely. Mr Leif was a very peaceful person. Not very talkative. Very entire unto himself. The wood was his perfect place. He was completely connected with every tree (every other tree, I’d catch myself thinking). And completely self-contained. He often disappeared for days, even weeks. I had company of course. Loved our neighbours. Birds, insects, animals. Delightful. But conversation rather limited. And on misty mornings, cloudy afternoons, dark evenings, I could feel melancholy.

One day I set off early, for a walk. A long walk. To the edge of the wood. Away from trees. Towards people. Perhaps.

I don’t remember much after that. Until I was sitting in a snowdrift. Singing. The man who pulled me out was older than me. And somehow younger. He had a look of Vernon March, fresh and bright but warmed by Sonny Summer’s smiles, yet shielded from burning intensity by the cool mystery of Mr Leif. This man had a great curly beard and long hair. He wore the colours of ivy and pine needles, broccoli and the young spears of winter wheat. He wrapped me in a crimson blanket, drove me in a scarlet-painted sleigh, welcomed me to his comfortable chalet. I loved the glowing warmth inside and the sparkling cold outside. Winter fires within. Winter sunshine without.

We married on Midwinter’s Midnight, lit by the northern lights. I wore my husband’s gift. It fitted me perfectly. It was – is – who I am. The colours of holly berries and mulled wine. The texture of comfort and romance. The clothing of love. Red velvet. He brought me a posy of snowdrops, aconites and Christmas roses set amidst delicate carrot fronds. My ice-white veil was held by a cap of purple-flowered rosemary and sage, interwoven with golden winter jasmine. My feet were warm in soft boots of green velvet and my hands were caressed by gloves the shade of frosty winter evenings.

At last I am fully alive. Vernon, Sonny and Leif have led me to my maturity, to the coming together of all my lives. To the Year Turner whom I know as Adam Wintergreen. I remember my past with pleasure. I live my present with delight. And I have a future. A daughter. She is to be married soon. Her husband is a young man, fresh, bright, like a spring breeze. She will wear a green gown, with a wreath of violets and primroses.