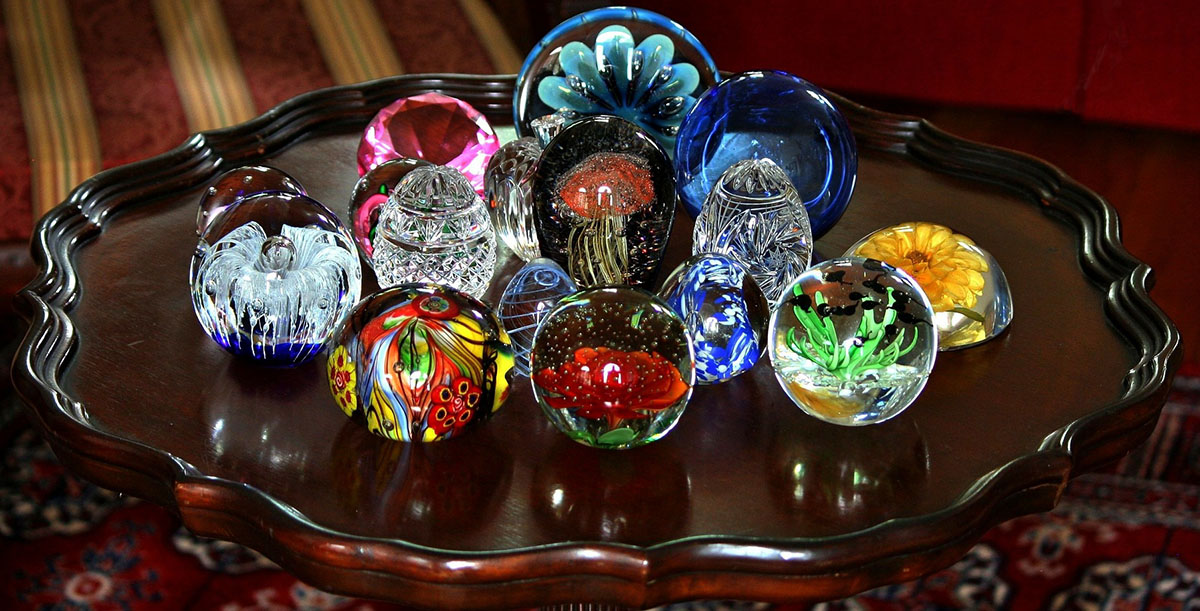 My father bought paperweights for her all the time. Every birthday, wedding anniversary and Christmas. When he died I continued to buy them for her. She became a collector. They sat in a teak display cabinet in the hallway, each one a strange planet in a human solar system revolving around her, its sun.

The house felt different that day in December; the colours had faded and despite everything still being familiar, it seemed disparate, no longer the place I grew up. My mother had passed some months before and I’d come back to clear out her belongings. She had run it as a bed and breakfast successfully for many years, but its fortunes had tailed off along with those of the whole city.

It was still a beautiful house. A Victorian four-storey terrace with huge rooms and high ceilings, situated on one of the many elm-lined avenues close to the city centre. My father had worked in the shipyards and helped out where he could, but after he died, when I was still a teenager, she had continued to run it by herself. It had been popular with travelling salesmen and contractors working in heavy industry, but once that all stopped she’d struggled.

I was in the dining room, packing things from the sideboard into one of the many storage containers, when I heard the once-familiar sound of knocking on the glass panes of the front door. Getting up off my knees and going into the hall, I tried to shield my eyes from the sunlight to get a glimpse of who it was, but the winter rays shot through the glass like spears and I couldn’t make the figure out.

Waiting outside was a short man with jet-black hair that was greying at the temples, who eyed me warmly. He wore beige chinos and a grey shirt under a casual blue jacket, and had a thin moustache that gave him an air of dignity. He nodded as I opened the door.

I asked if we had met; he smiled and replied in excellent English that we had many times, but only when I was very young. He said he was from Colombia and that he had stayed with my mother and father for over a year while he worked here in the 1980s at the now derelict brewery.

I told him my mother had died, and he looked genuinely sad and offered me his hand again. Asking him to excuse my manners, I invited him in. He told me he’d known about my father’s passing as he had come back a year or so after his death. I didn’t remember this or it being mentioned by my mother.

I’d already packed away the kettle, so I suggested a beer as it was the only thing I knew was in the house. He smiled again and nodded, before asking if he could have a look around. I left him to it and went off to find the beers. After hunting through a box for a bottle opener, I found him up in the attic, sitting on a box and looking sad.

He took the beer and toasted us in Spanish: ‘Salud.’

He took a long swig of his beer and raised it once more to the heavens before wiping his mouth with the back of his hand. He said that this was the room he’d lived in for nearly fifteen months and that, as a toddler, I used to keep my mother company when she cleaned up here, so he would always leave me biscuits in a cupboard. I smiled and thanked him, apologising for not remembering. He laughed and then rested his elbows on his knees, hunching his shoulders slightly.

He said the Colombian government had sent him to England to learn new skills to take back to Bogotá and help the state set up their own breweries. The cold was a problem when he first arrived, but he’d soon made friends, and had taken me and my sister to see the dray horses every now and again at weekends.

After another swig, he looked distastefully at the bottle and said how shameful it was that the brewery had closed, along with the shipyards and everything else that had made this city great. I nodded in agreement and squirmed as I perched on the edge of one of the removal crates.

He told me that when he was here, he couldn’t afford to fly home to his wife and son for Christmas, but my parents had insisted that he spend Christmas Day with us and that he use the phone to call his family.

Looking up and around the room, he smiled to himself, before asking me what I was doing with my life. I told him I’d moved away to university at eighteen, then got a job in the capital, where I met my wife. I’d never returned.

He nodded and told me his eldest son was a similar age to me, and that he had one a few years younger as well. They’d had it tough in Bogotá and he’d had to bribe the government to stop them doing national service; many young men were sent to the mountains to fight the guerrillas, often never to be seen again.

I asked him why he was back in England. He told me he worked for the Colombian national airline and that he’d decided to take a two-day stopover in England on his way back from a conference in Berlin.

I wanted him to stay and tell me more, but at that point he stood up abruptly and put the empty bottle on the crate. I’d barely touched mine. I followed him downstairs slowly. At the foot of the stairs he stopped, looked towards the display cabinet and sighed.

‘In a box,’ I replied, pointing towards one of the many identical crates. He stared at it for a few seconds.

‘I remember your father buying them for her. He showed me one once when she was out buying groceries – the day before her birthday maybe, I don’t know. He loved that one, but I thought it was awful. I didn’t tell him, though.’

‘I never liked them much either,’ I replied. We both laughed.

At the door he shook my hand again and said how sorry he was for my loss.

I asked him if I could give him a ride anywhere – to the station, maybe – but he said he wanted to walk. On the steps he was careful to avoid the patches of ice that had formed. Halfway to the gate, he turned back to me.

‘You know what I miss most about England?’

‘Clarks shoes. The best shoes in the world.’

I laughed and he beamed back at me, lifting up his chinos to show off red socks above brown suede shoes.

‘I have three pairs in my suitcase to take home.’

He took his phone from his trouser pocket and gestured for me to pose for a photograph. I leant against the wooden frame of the porch and smiled awkwardly.

And with that he was gone.

I had never once asked my mother whether or not she liked the paperweights, and she had never talked about them.