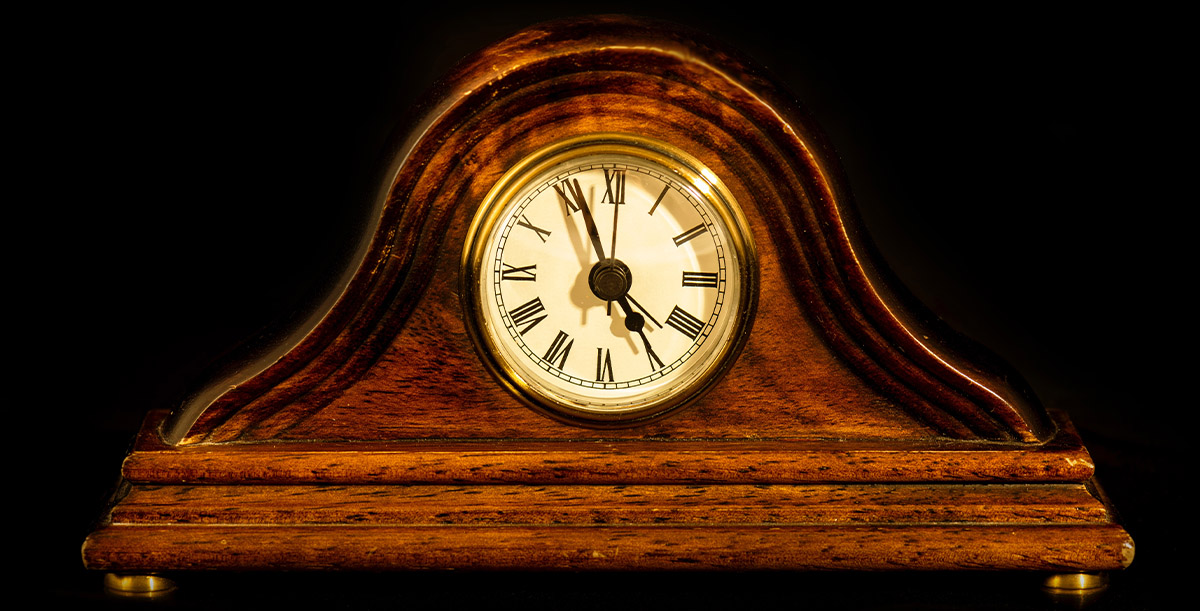 It was a great big brute of a clock. With a round fat 1950s face and muscular mahogany shoulders, it crouched on the mantelpiece spitting out the seconds. But what it lacked in grace it made up for in status. Along with my mother and myself, it was my father’s most prized possession; recognition by the golf club of his unequalled reign as captain.

Oddly, its robust appearance disguised a nervous disposition. The slightest upset could trigger a breakdown. A draught from a window. A belch of smoke from the fire. A thoughtlessly slammed door. The clock repairman appeared on our threshold almost as often as the Jehovah’s Witnesses.

Of course I, an eight-year-old who’d not yet quite mastered the coordination of my arms and legs, was banned from its vicinity. Even my mother, a woman and so assumed to be competent in the delicacies of dusting, was not allowed to touch it. My father himself, before heading for the links each Saturday morning, would look after its needs: winding it with the precision of a surgeon, polishing it with a tenderness of which those who knew him in his wider world would not have believed him capable. He would stand back from the fireplace, snort with pleasure and depart for the first tee with a newly shining sense of self-esteem.

It was a Friday afternoon when I came home from school to find my mother standing stock-still in the front room, her face as white as the flour on her fingers.

She spoke the last word with a panicky dread which transmitted itself to me in one terrible split second. She stared at the clock, then back at me. It was a warm, placid summer’s day. There had been no gust of wind, no smoking fire, no natural phenomenon at which she could point a trembling finger. We both knew what this could mean. It hung between us, clearly seen but never to be spoken of.

With total truth I denied the deed. My mother did not press the accusation and returned to the preparation of my father’s supper. But tonight it was without her usual off-key rendition of the songs of Rodgers and Hammerstein. Nor did the Home Service broadcast the six o’clock news through the old wireless that sat on the shelf above the sideboard. What filled my ears instead was the thumping of my heart. In London they had just hanged a poor boy called Bentley for a crime he had not committed. Now I imagined I knew what he’d felt as the minutes ticked by. Except, of course, in our front room they no longer did.

At six thirty precisely, the silver-grey Vauxhall growled through the gates. Despite the beauty of the day, it was soon clear that out there, in my father’s other world, there had been stormy weather. I watched as my mother grew so tense that the air around her seemed to shiver. Every evening, she offered up a large whisky in thanks for my father’s safe return from the city. Tonight, he drained it at a gulp, poured another, then slammed himself into his chair at the head of the table. The only conversation was between the cups and saucers, the plates and cutlery. Of course he did not notice that my mother and I hardly spoke or ate. His thoughts, as so often, seemed still to be in the company of the serious people and important matters of which my mother and I knew nothing. We knew with certainty, however, that when he’d eaten, he would listen to The Archers. In order not to miss it, he would keep a sharp eye on the time and, being short-sighted and determined not to wear glasses, this would require his crossing to the mantelpiece and peering at his clock.

The moment came. The spoon fell into the empty pudding-bowl. The chair screeched backwards. My mother and I looked at each other, two drowning souls about to go under for the last time.

‘Did you touch my clock, young man?’

‘You are absolutely forbidden to touch this clock. You have been told that a hundred times. Have you disobeyed me?’

Somewhere in another dimension, I heard a door close as my mother retreated from the room. All I could see were the twin faces of my father and his clock, each now as ugly as the other. A great hairy fist grabbed my puny arm. My schoolboy shorts of grey flannel were tugged down my legs. And the pain began – made even sharper than usual by injustice. Red, raw, unrelenting, until merciful tears came and washed away the world.

When I opened my eyes again, I was somewhere in the night. I didn’t remember getting to bed; my mother must have carried me there as I wept. I lay there, coiled up under the blankets, clinging to a raggedy woollen dog called Towser. My eyelids stung; my buttocks flinched from any movement. And though the usual night light flickered on the bedside table, the dark I had always feared so much seemed darker than it ever had before.

Years later, when my father was long dead, my mother would tell me what had happened in the front room that night after I had been removed from his sight.

My father had poured himself an even larger whisky, lit a Capstan and sat down before the fireplace in the old winged chair of red brocade which nobody else was allowed to occupy. He had missed The Archers. My mother was slowly calming herself with the tapestries she worked on every evening. That night it had been a view of Edinburgh Castle, she said. Then, suddenly, she’d stood bolt upright, the tapestry tumbling to the hearthrug.

‘What’s the hell’s the matter with you, Bella?’

My mother had sunk down onto her knees like a penitent, her eyes wide, her fingertips thrown up against her cheekbones. Then, pulling all her courage tightly around her, she’d straightened her back and spoken her just-realised truth.

My mother told me that she had never seen such a look as that which came over my father’s face. His eyes, she recalled, became quite empty. Suddenly robbed of the absolute certainty that usually lived there. He stared blankly into her. Yet instead of feeling her usual fear of him, she said that in that moment it had gone from her, entirely and forever. At first, his heavy body had gone rigid with shock, but then it had begun to sag into the corner of the old winged chair. My mother had risen from her knees and gone to him. He’d glanced down at the big heavy hand on which her tiny fingers now rested, then turned his gaze away from hers.

The night light guttered as my bedroom door opened. I smelled him first. Brylcreem, cigarettes and whisky. The breath of a man’s world, where one day I would try to be everything he wanted me to be. For the second time that night, the heavy hand enclosed my arm, but now my flesh was cupped like crystal and gently tucked away beneath the blanket. The matted curls were brushed back from my forehead. A rough chin scratched against my cheek. A voice I had never heard before whispered into my ear.

My father’s clock was never again mentioned in our house. When I braved the front room the next morning, it was gone from the mantelpiece. In its place, my mother had put a vase of red roses, just about to bloom. As she laid my breakfast on the table, I sensed a lightness in her that had not been there before. My father, she told me, had gone out for a walk. He’d not be playing golf today, he’d said.