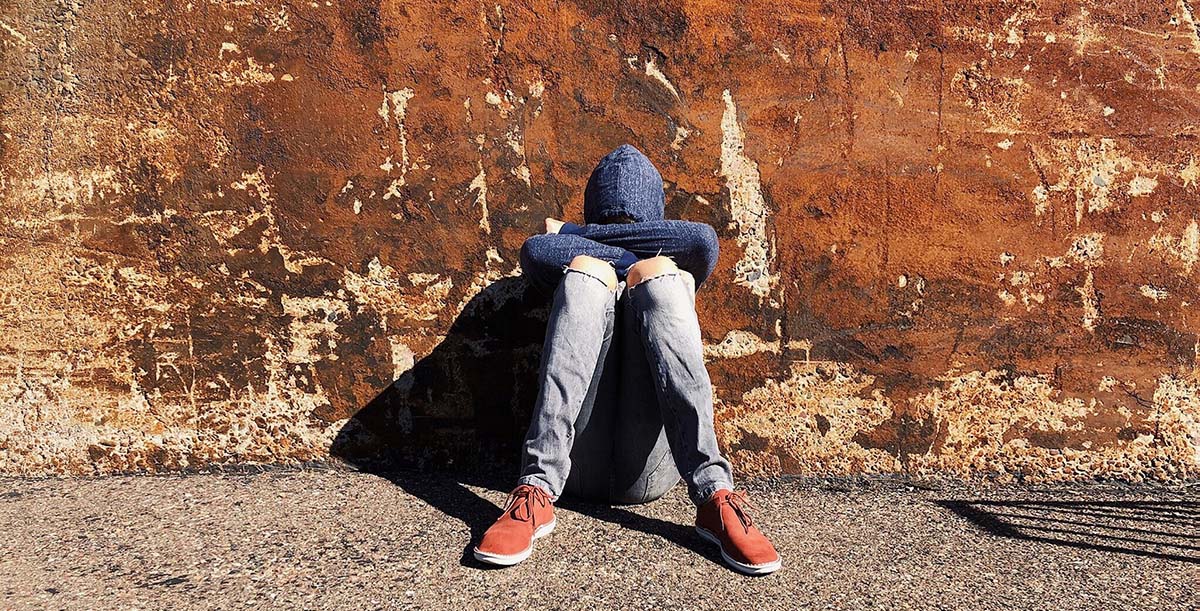 Joe bowed his head. He would not let Mr Collins see the tears that were pooling in his eyes.

‘Joseph,’ Mr Collins prompted. The headmaster waited, then gave an exasperated sigh. ‘You leave me no other option. You understand I cannot tolerate aggressive behaviour. I do not issue suspensions lightly, but all these warnings and detentions, and now an assault on a member of staff.’

It was hardly assault. Mr Wood had tried to confiscate Joe’s phone. Joe needed his phone in case of problems with Peter.

He would, thought Joe.

‘Claims you lunged at him. Animalistic, he says.’

Joe stared at his scuffed shoes. What was the point? No one would believe his word over that of a teacher.

‘I didn’t think we’d come to this, Joseph. You’ll leave the premises immediately after our meeting.’ Joe raised his eyes, looked up from under his long fringe. ‘You will be set work for five days and a letter will confirm the full extent of your leave of absence. I suggest you take the opportunity to have a long, hard look at your life. Do you have anything to say?’

Plenty, thought Joe. The last thing he wanted to do was take a long, hard look at his life. They’d get taken away for sure now. He’d screwed up.

At the gates of Hampton Primary School, Joe waited for his brother. He’d signed him up for after-school club every day to allow himself time to get there and collect him. It had been a bit tight when Joe had got detention, but the school were understanding because of the circumstances.

Peter chatted all the way home and Joe wondered if they’d be separated or kept together when they were taken away.

At home, he made Peter a snack and plonked him in front of the telly. His mum’s room was dark but he could smell the vomit as soon as he pushed the door open. His biggest fear – other than him and Peter being put into care – was finding her dead. Joe turned the light on and his mother groaned. He assessed her. She’d been in worse states. He’d considered locking her in the house when he left, but on the nights he had to work he feared for Peter if there was a fire. Besides, she’d probably climb out of a window to buy booze. Joe ushered his mum to the bathroom and cleaned her up.

‘You’re a good boy, Joe,’ she mumbled with sticky lips and rancid breath. Then she dissolved into tears. He didn’t mention the suspension. Even if he had, she wouldn’t have taken it in. Instead, he stripped the bed and remade it with clean linen, then brought his mum tea and toast, sitting her in the old rocking chair.

‘Beans on toast, Petey?’ Joe called to his brother. There was little else. He checked the clock. No time for him to eat. He’d have some crisps at the pub. ‘Get yourself to bed at eight o’clock, okay?’ Peter nodded. Joe had to trust he’d do as he was told.

Beryl, the pub landlady, often made Joe a sandwich for free, and he was grateful for it tonight. As he collected glasses and washed crockery, Joe wondered if he could get extra shifts during his suspension. He was so far behind on schoolwork that he saw little point in going back at all. Plus, they needed the money. Petey needed new shoes. Mum’s job was gone. They’d given her compassionate leave, then half pay, followed by warnings, and finally the sack. She’d held it together until Dad’s funeral. Then something snapped. And he was in charge now. She kept saying, ‘You’re the man of the house, Joe.’

Towards the end of his shift as Joe was clearing glasses from a table of rowdy drinkers, one of them spilled their pint over his last clean pair of jeans. Joe cursed inwardly. He’d have to stay up late tonight and sort the laundry. As long as Petey had a clean uniform; it wasn’t like Joe would need his for a while.

Beryl always paid him in cash at the end of his shift. Joe had the keys for the electric and gas meters in his pocket. He’d go to the Spar and top them up.

As Joe was leaving the pub, he bumped into someone. His apology tailed off as he recognised the man.

‘Hatchet,’ Mr Wood sneered. ‘Underage drinking to add to your delinquency. You reek of beer and you can’t even walk straight. Disgraceful.’

Joe wanted to hit him. Instead, he tried to push past, but Mr Wood barred his way.

‘You’ve already got me on suspension,’ Joe mumbled.

‘No, boy. You got yourself suspended.’

‘Fuck off,’ Joe muttered, so tired he was past caring.

‘I beg your pardon?’

‘Fuck off, sir,’ Joe said, raising his head and looking at Mr Wood with steely eyes. What did it matter now? It couldn’t get any worse.

Mr Wood loomed over Joe, so close he could almost taste the teacher’s stale cigarette breath.

Mr Wood backed away and spun around. He eyed Beryl – who could floor a man with her left hook – then scuttled off.

Joe ran to the Spar but arrived to find it closed. At his wits’ end, his body wracked by the burden of failure, Joe collapsed in the doorway. He hauled his knees to his chest, rested his head on his arms and sobbed until he was spent.

A while later, as Joe was getting so cold he feared he might be unable to move, a wet nose nuzzled him and panted warm breath in his ear.

‘I thought that bundle of baggage was you,’ Beryl said. ‘You’d best come with me.’ Joe hesitated. ‘Come on,’ Beryl ordered, reaching down and hauling Joe to his feet.

In the pub kitchen, Beryl microwaved a lasagne and plonked it in front of Joe.

‘What’s going on with you? You’re like a vagabond,’ Beryl said, but her tone was gentler than Joe had ever heard it.

Joe took a deep breath. ‘He hanged himself,’ he blurted out. There. He’d said the thing no one ever mentioned.

Then Joe couldn’t stop himself. ‘Mum drinks and she lost her job. I’m the man of the house now and I’m supposed to look after her and my brother and I’ve been suspended and I thought now I’m done with school you could give me more shifts.’

Beryl shook her head. ‘I’m not giving you more shifts.’

Joe slumped. ‘Please, Beryl.’ He began to cry. ‘I’ve royally fucked up. They’ll put me and Petey in care for sure now.’

Joe looked at Beryl, who no one ever had the nerve to challenge.

‘I promise,’ Beryl said. ‘But you do need help. There must be someone.’

Joe shrugged. ‘Only my gran, but Mum hates her. They had a fight at the funeral. Gran said mean things to Mum.’