Santa and My Husband 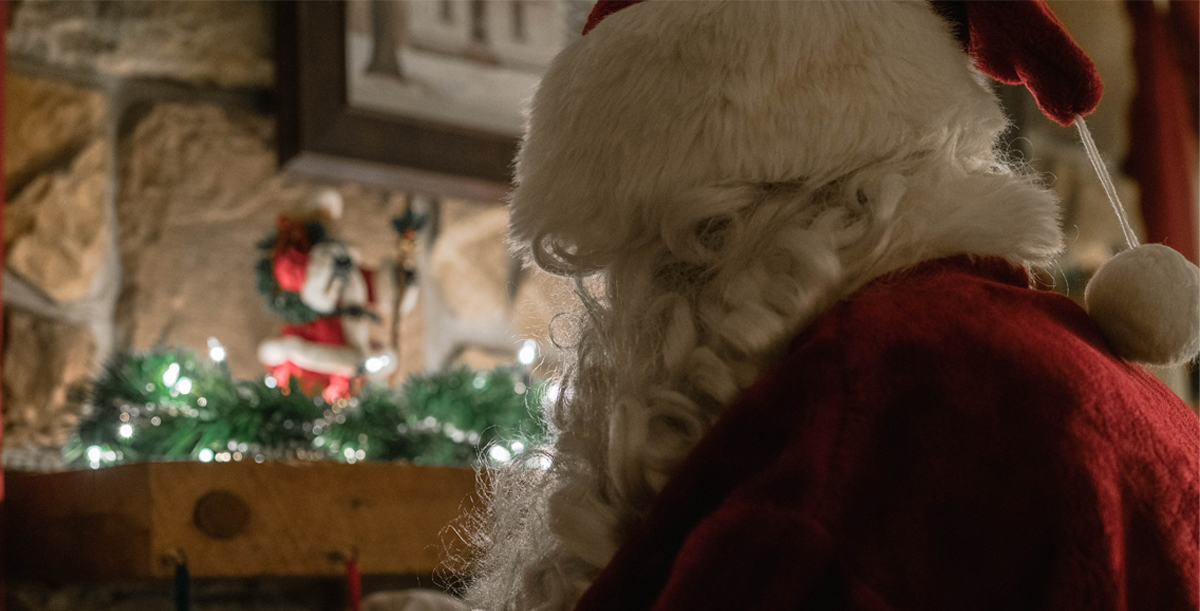 Before my husband’s night shift, I put a three-bean chilli on the table and kiss him on the head. He is holding his phone in his hand and scrolling through his December rota. The night of the 24th is marked as LN − long night. As is the following night. I had only just put the beans to soak when he told me this, so I’ve had plenty of time to work myself up into a knot. The whole day has been blurred with visions of me watching the Queen’s speech with microwave lasagne while he sleeps.

Now I say, ‘I don’t want to be alone on Christmas day.’

He replies, ‘Can you grab the cheddar for me?’

I go to the fridge, take the cheddar and bring it back to him.

‘Thank you,’ he says, looking around his placemat. ‘Oh, um… Would you mind?’

I go and fetch the grater and hand it to him. Then I sit and lean my chin into my hand, making a face like I’m expecting a reaction to the Christmas thing.

He forks a heap of beans into his mouth and says through them, ‘I know you don’t want to be by yourself. I don’t want that either. Go and be with your family.’

I know he has. I shudder at this and say, ‘Can’t you swap with someone?’

‘Would anyone actually want to swap with you?’

He licks a fleck of cheese from his thumb. ‘It’s good money,’ he says. ‘Someone might.’

‘But then you’d have to work during the day, right?’

I huff. There’s this thing about Christmas that feels a bit like putting on a musical in an abandoned warehouse. It decorates the dead space of winter in a meaningful, pervasive way, but the whole point of it is the show itself. There’s such a long, glittering build-up to the bright flash of Christmas day and if there’s no one there to see it with, it’s all pointless. The John Lewis advert is pointless. The giant white baubles in Boots are pointless. I almost bought an advent calendar yesterday; that would have been pointless. Advent calendars are definitely pointless.

My husband told me once that he did a shift on Christmas day and the doctor let them give one of the older, sicker patients a small cup of brandy, just because it was Christmas and she was all alone. After she drank it, she thanked them, then wept quietly for the rest of his shift. When he got home, he opened the present that he’d wrapped for himself and ate breaded fish from Aldi’s. He didn’t have a mobile phone at the time so he went out to the phone box on the street to call his parents, but they didn’t pick up and he ran out of change so he went back to his flat and washed his scrubs. When he told me this I was horrified. ‘You wrapped your own present?’ He shrugged and said, ‘Yeah. It was Christmas.’ And I said, ‘Wasn’t anyone around to at least have a beer with you?’ Another shrug. ‘I had work the next morning. My housemates had gone home. But I bought myself a little tree and decorated it with sweets. You know, one of the tiny table-top ones with the fibre optics?’ He aimed his smile just next to me as if the tree were by my shoulder and he was re-looking at it.

It was the saddest thing he’d ever told me.

Thinking about this now makes me nervous about the whole Christmas thing and so I say, ‘Thank you, love. If you could swap, I’d appreciate that.’

There is an advert with a kid standing to attention next to his mother. He has a drinks tray in one hand and a tea-towel over his arm. His hair is slicked down and he is looking straight ahead while his mother reclines on her sofa with a cocktail.

‘That seems a little unfair,’ says my husband. ‘He’s only, what, six?’

‘He’s being good for the elves,’ I say. ‘It’s a parenting trick to make kids behave at Christmas.’

‘The what?’ says my husband.

‘The elves. You know. Santa’s helpers.’

‘When I was little,’ I say, ‘my whole family used to start spotting elves at the beginning of November. If I wouldn’t go to bed or if I threw a tantrum over something, one of them would shout, “Quick! There’s an elf!” and I would stop whatever I was doing and look around. “Quick! Go to bed before it sees you!” And I would go. Just like that.’

‘My parents never did that,’ he says. ‘I guess they weren’t looking out for Santa’s elves.’

‘Well, perhaps it’s cultural thing,’ I say. ‘Once, my parents called me into the front room, “Quick, come, quick!” they yelled in a whisper and so I went running in and they were both looking out of the window. Then they made out like they were all deflated and disappointed. “You missed it!” they said. And I said, “What? What did I miss?” and I really had no idea what they’d seen which made the whole thing even more thrilling. “The sleigh!” they said, and my goosepimples rose as my mouth dropped open − I remember that exact feeling. “And all the reindeer.” My dad pointed up to the sky. “It just flew by.”’

My husband has stopped eating and is looking at me like he is hanging off my every word.

‘Yes,’ I say. ‘I can remember feeling like something magical had happened.’

He looks just beyond me, the way he did when he was remembering his tiny Christmas tree all that time ago. After a moment or two he picks up his fork and starts eating again, but he is still looking past me and every so often he shakes his head as if he is having a conversation with himself about what I’ve just said.

I smirk. ‘I guess it does seem strange, you know, to make kids excited like that. What does it teach them, really?’

I turn back to the TV. People are smiling as they produce plates of party food and place them on a table thick with holly and silver balls. I sigh because I’ll have to let all of this go over my head for the next six weeks. A woman in a paper crown steals a sausage roll from the table. Sleighbells shake in the background and I wonder if the producers have considered the fact that holly is poisonous. They shouldn’t put it so close to the food, really. The news comes on.

‘It’s six already,’ I say, turning back to him. ‘Are your scrubs still in the dryer?’

He has stopped eating again and is looking right at me.

‘In Santa,’ he says. ‘I don’t think I believe it really happens.’ He casts his eyes down and frowns.

‘That what really happens?’

‘That he delivers presents. I don’t think it’s true.’

I squint at him for a moment before I say, ‘Are you kidding me?’

‘You’re not kidding, are you?’

‘Yes, I know,’ he says. ‘It’s just that, I used to sit up and wait for him but he never brought me anything, so… Then I guess I got too old. I’m too old now. Like you said.’ He readjusts his shoulders, cracks his knuckles, avoids my stare. ‘I’m too old.’

‘I used to think that it was like a lottery,’ he says. ‘Only certain kids got lucky.’

My left eye picks up the quiver on his top lip. His hands hold each other in his lap and he is gazing at his plate.

‘My scrubs are still in the dryer,’ he says. ‘I’ll give them another blast just before seven so they are warm when I put them on.’

I swallow and reach for his hands in his lap, under the table. ‘You know, I don’t think my parents lied to me about the sleigh,’ I say.

He lifts his eyes to mine.

He nods for a moment, then: ‘But did you ever see him?’ he says.

‘Did he bring you presents?’

And I’m not lying. He did bring me presents. That was the truth for my child self and now I am sharing this old truth with my husband. He is still grinning like he’s genuinely happy about that and it seizes my heart to imagine those same teeth, in his younger, smaller mouth, holding tightly to quiet breaths as he sat on his bed in the dark, waiting for Santa. ‘I don’t believe you’re too old,’ I say.

He takes his plate and starts to stand up. The moment is gone but his grin is still there, and I’m already thinking about my Christmas stocking up in the loft somewhere and that I will buy that advent calendar, in fact I’ll buy two.