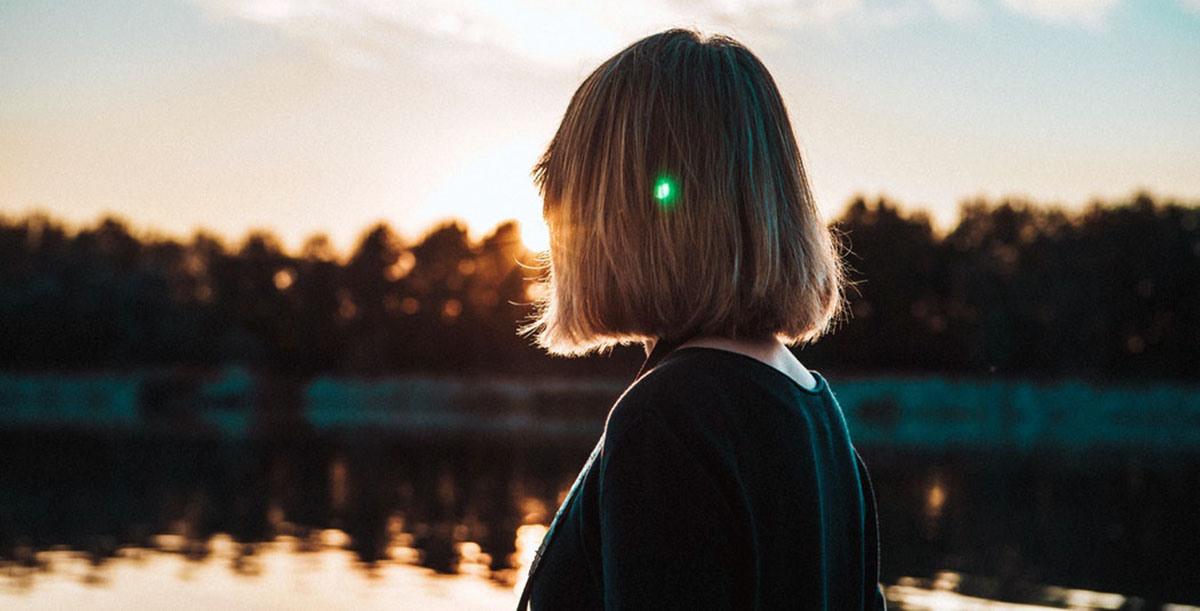 Night in the country has an inkiness about it altogether unlike night in the city. I stood in the garden of our new home and let the darkness pour itself around me. The only light came from stars tossed like glitter across the arc of the sky and a thin curve of moon shining on the black water of the pond. The wind breathed through the trees and small creatures scuttled beneath bushes. I stood perfectly still, feeling alone but not lonely, savouring the almost unbelievable fact that the house was mine.

For the last decade we’d driven through the village on our way to work. Though my now ex-husband, Mike, was impervious to its beauty, I rejoiced in all its seasons: green and blue in spring, gold in summer, ochre in autumn, pewter in winter. The house that always caught my eye was set back from the road in a garden fringed with trees. It occasionally looked inhabited, but sooner or later a ‘For Sale’ sign would appear at the gate. Mike was deaf to my pleas to at least look at it. He was a city boy, he kept repeating. There was nothing to interest him in the country and the frequency of those ‘For Sale’ signs either meant the current owners had come to the same conclusion, or there was something wrong with the house. And even if neither of those things were true, country schools were crap, so how did I imagine Tim would ever get up enough speed in a village school to gain that scholarship to St Bart’s?

The divorce was a long time coming, but inevitable. The day Mike finally cleared out the last of his stuff and flew north to his new job, new woman, new life, I returned to our half-empty townhouse and rang the real estate agent. His response was hesitant when I asked if the house in the village was still for sale, but he made an appointment for me to view it.

My heart was beating hard. The real estate agent stood with pursed lips while I wandered around the garden, took in the broken fences and run-down sheds. Tim trailed behind me, bored and sullen, until he saw the pond. He gathered up a handful of stones and threw them into the water making ripples that spread out to the edge. I watched him, trying to read his expression. Reserved by nature, he’d become taciturn since the divorce.

I touched him on the arm. ‘Well, what do you think?’

The day we moved in I was occupied with positioning furniture and unpacking boxes. My mind raced with plans: I’d get the dilapidated sheds pulled down, have the fences repaired, plant a vegetable garden and buy Tim a dog. The house was structurally sound and needed only a few coats of paint inside and outside to freshen it up. The shed near the pond was in reasonable condition and could be converted into my pottery studio. I was so absorbed that I hardly noticed Tim was missing until lunchtime. When I couldn’t find him in the house I looked in the garden and saw him standing by the pond, throwing stones into the middle and watching the effect. I called his name. When he turned round he looked at me with such empty eyes that I caught my breath. Then he seemed to recollect where he was and said, ‘I’m hungry, what’s for lunch?’

He ate in silence.

‘It’ll take a bit of getting used to, you know,’ I said. ‘Leaving our other house, all your friends, your father going up north. But you’ll see him in the holidays and you’ll make new friends.’

Several weeks after he’d started school in the village there was no mention of new friends and my inquiries met with an indifferent shrug. I phoned his teacher. She said the other children did try to involve him in their games, but so far Tim was reluctant to join in. However, I mustn’t worry as it was normal for some children to take a wee while to settle and it was best not to force him. At home, all he ever seemed to want to do was throw stones in the pond. It was the only time I saw him smiling, so I thought it best to leave him alone for now.

Over the following weeks I sanded, painted, and sewed curtains and cushions. Gradually the house took on new life. Tim continued spending all his spare time by the pond, and mindful of the fact that I’d promised to let him find his own rhythm, I gave up trying to involve him in projects around the house. I told myself he had a right to create his own space. And then one day I heard him talking. I was standing inside the shed planning how to turn it into a studio when I glanced out the window and saw Tim take up his usual position by the pond. Unaware of my presence, he cocked his head to one side as if he were listening carefully to someone, occasionally interjecting with comments of his own. I couldn’t hear what he said, but his tone suggested a conversation with a friend. Even then I wasn’t alarmed. I knew it wasn’t uncommon for an only child, especially one with Tim’s personality, to have an imaginary companion. I’d had one myself when I was his age. After a few minutes I heard him call out, ‘Bye Andy.’ I stood in the doorway of the shed watching him run over to the house.

The weatherboards of the house were now gleaming white. The garden would be bright with flowers in the spring. We would put down roots here and I was sure Tim would thrive in this environment. I’d been too busy to involve myself much with people from the village. They were friendly enough in the shops, though oddly guarded when I enthused about restoring the house. I supposed they saw me as yet another townie who wouldn’t last long in the country and, like previous owners of the house, would soon be on my way.

I walked over to the pond. Its surface was as smooth as glass and I saw my face staring back at me. I reached down for a stone and threw it in as I’d seen Tim do so many times. My reflection broke into pieces. As I watched the ripples settle it seemed for a fleeting second that there was another face next to mine. When the water was still again, there was, of course, only my own.

That night, when Tim was in bed I sat beside him in a chair, ruffled his dark curls and asked him if he was happy.

‘Yep,’ he replied, looking at me with eyes that always seemed too big for his face. Unreadable grey eyes, so like his father’s. His silent, introspective nature was his father’s too. I wondered again how it was that what I loved so dearly in the child, I found impossible to live with in the man.

‘You spend a lot of time down by the pond,’ I said, trying not to make it sound like an accusation.

He shrugged. ‘So I can talk to Andy.’

‘He’s lonely. He wants a friend, but they all leave him in the end. I promised him I wouldn’t.’

After a pause I said, ‘Okaaay. I had an imaginary friend once who I used to talk to all the time, too. Her name was Sophie. She left when I made real friends.’

Tim glanced at me and closed that door between us.

The next day he ran off to school as if the conversation hadn’t happened. I carried on painting all morning and in the afternoon I strolled around the garden trying to decide where to plant the vegetable garden in spring. I wandered over to the pond and stood there for a few minutes staring at my reflection, thinking about what Tim had told me, wondering what Mike would say if he knew. He’d probably say it was my fault for pandering to such nonsense. Perhaps that was true.

In the garden centre I was paying for my packets of seeds when the cashier asked how I liked living in the house.

I raised my eyebrows.

She reddened. ‘Oh dear! I’m sorry! I thought… Never mind all that. It is a lovely house and I hope you’ll continue to enjoy it. That’ll be fifty dollars, please. Now would you like one of our loyalty cards?’

My drive home took me past the real estate office. When I walked through his door the agent’s eyebrows shot up into his hairline.

I came straight to the point. ‘What happened in that house?’

He was immediately evasive. ‘Best not to listen to gossip.’

‘But that’s the thing. There is no gossip. People change the topic.’

He blew out his cheeks. ‘A tragic accident ten years ago. A young boy fell into the pond and drowned. Not something people round here like talking about.’

‘But the pond isn’t deep. How did he drown in it?’

He shook his head. ‘The coroner ruled it was an accident.’

‘What was the child’s name?’

On the way home I glanced at my watch and realised Tim would have got back half an hour ago. The children at school must have told him the story about poor Andy. A tragedy indeed, and, sensitive child that he was, it explained Tim’s fixation with the pond, but his belief that he was actually speaking to Andy was, to put it mildly, concerning. This was my fault for leaving him to his own devices too much. It was time to drop the hands-off approach. I would have a talk with him. I’d suggest a few clubs he might like to join. I’d suggest inviting his classmates round. I’d ring Mike and ask him to have Tim for the mid-term break.

Back at the house I ran into the kitchen expecting to find Tim at the table doing his homework by the fire. He wasn’t there so I went out into the garden. I saw him at once. Face down in the pond. Even before I could form a scream he began to move. He stood up and staggered over to the edge, shaking water out of his face and hair. He looked up, saw me and laughed.

‘My God Tim!’ I gasped. ‘Get into the house and out of those wet clothes before you catch your death.’ I pushed him into the kitchen with shaking hands. ‘What on earth were you doing?’

I threw him a towel and went to his room to find warm, dry clothes. I heard him whistling as I rummaged in the drawers. Still struggling to breathe I returned with the clothes. He looked at me, grinning. The grin pushed its way into a memory. The memory of my own reflection in smooth grey water and beside it, fragmented by ripples, another face. The same face, I realised, that was looking at me now.