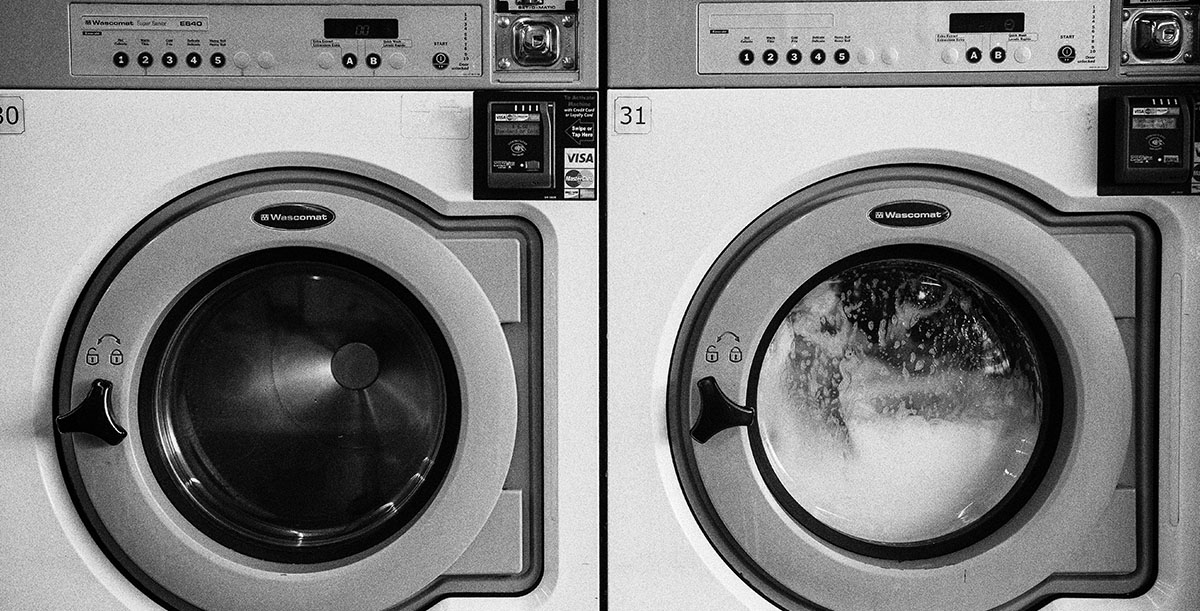 Tara sat in front of the washing machine. She looked at the way the clothes moved in circles, sometimes showing a little bit of colour but mostly just black; she listened to the machine, a constant hum that echoed in the room where she waited. She thought about the way the clothes resembled a hurricane and how if she put her hand in the machine the clothes wouldn’t touch her, just like standing in the eye of a hurricane, knowing you’re in danger but at the same time knowing you are safe. When the machine beeped she took out the clothes and put them in the dryer; the ones that were delicate she extended on a drying rack.

Once again, Tara sat and watched the machine dry the clothes. This time she thought of the ocean: the way the machine rolled and threw the clothes to the other side made her imagine herself at the beach, watching the waves crash onto one another and hearing the sounds of the seagulls while they hunted for fish and crabs on the sand. Tara’s body started to heat up from the ocean sun, but the moment the dryer beeped, she once again became cold with routine.

The clothes were placed into a basket and then carefully folded and divided depending on the owner of each item. Tara didn’t leave a single crease on the fabrics; everything was done perfectly. She sped up the process of drying the clothes on the rack by placing a space heater nearby; when they were done she folded them as well. Just as she’d been instructed, she sprayed the fabrics with a special mix of essential oils that smelled mostly of lavender and then placed them in a wooden basket. She put the basket by the door, lit a candle and sat facing the wall. There, she waited.

The quiet creak of the door opening startled Tara but she continued to face the wall. When the door closed she turned around and the clothes were gone; in their place was a grilled cheese sandwich and a glass of water. She took the food, sat down on the only chair she had and ate in silence. She appreciated that the sandwich was grilled; they never gave her food that she really liked so she had devised a system to trick them into giving her food she preferred. Whenever they gave her something she didn’t like she would finish the entire plate, but when they gave her something she liked she would leave some of the food. So far this had worked perfectly: every time they’d give her more and more food that she actually liked.

After finishing, she went to the bedding placed in the corner of the room and slept. She dreamt of the day she would finally be freed, the day she would be able to smell something that wasn’t laundry detergent.

Tara woke up feeling happy, and when she looked at the door to find another dirty laundry basket to wash she felt motivated to finish the task until she was forgiven for her sins and freed. She washed the clothes all over again, humming because she was certain that her release would be soon; she started thinking that she might actually miss the place, the routine. Once again she placed the clothes by the door, faced the wall, and waited for them to be taken away; she ate the only meal she’d get during the day and then went to sleep.

When Tara woke up the basket was back, with more clothes to wash. She washed them, ate, and then went to sleep. But the next day, when the clothes were taken away and she was eating her dinner, a slight breeze blew through the room. Tara was disconcerted by this, since her room was completely sealed and the only time she could usually feel a breeze was when the door opened. She looked at it for a few minutes before deciding to approach it, but when she finally touched the wood, the door was unlocked.

Beyond the door was a hallway that ended in some stairs leading to a patch of light. Tara couldn’t move. She stared so hard and so long at the light that her eyes began to hurt; she didn’t know what to do, she didn’t know if she was free. Adrenaline ran through her veins as she took a step into the hallway, but then stopped – she was afraid. Advancing would mean leaving what she had known for years and taking her chances in a world she no longer knew, but going back would mean abandoning what was probably the only chance she’d get to be free. She felt as if two distinct forces were pulling her back and forth; anxious tears ran down her skin. Finally, she made up her mind and decided to walk into the unknown. Her desire for freedom was too strong, and her desire for life had been running through her veins for years. Every step felt like a fantasy, as if at any moment she would be shaken out of a dream, but as she got closer to the door she realised that this moment was real, that this breeze was truer than her time washing clothes.

The door burst open and rays of sunlight lit her skin to a warm orange. The sun coursed through her body, tingling every single nerve. A blast of oxygen filled her lungs: she could actually taste it. Opening that door was a sensorial discharge of emotions and all she could do was to take it in and try to never forget what freedom felt like. Tara stepped through the door and her bare feet touched the moist grass. She cried, the tears falling rapidly into a smile that had disappeared years ago; she felt like she had finally found something she had been looking for since the day she was born. She was about to run, about to let the adrenaline push her legs forward and never look back; but instead she stepped back. She turned around, closed the doors, walked through the hallway into her room and shut the door.

Tara sat on her chair facing the wall and waited.

She waited for the next laundry batch to be delivered.