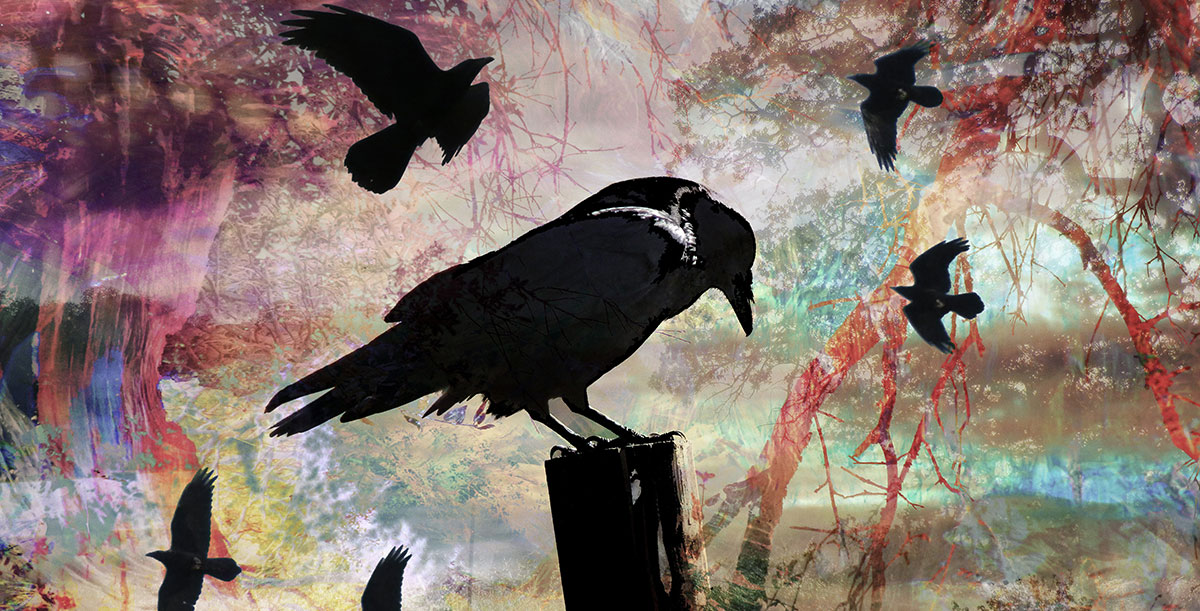 ‘Damn, damn, damn it.’ James bangs the pen down on the table causing the coffee cup to rattle in its saucer and the two fresh roses to quiver in their vase. A woman’s voice breaks into his frustration.

‘Can I sit here? There’s not much room today.’ James looks up, sees a woman in her mid-thirties pulling out the chair opposite him, scraping its feet on the paving stones.

‘Yes, of course. Here, let me move these papers.’

‘What are you doing then?’ She nods to his papers.

‘I came here to find inspiration for my poems.’

‘Right.’ Her eyes glaze over.

James fights his corner. ‘Dylan Thomas played here when he was a boy. He wrote about the park. He was known as the Rimbaud of Cwmdonkin Drive.’

‘Really?’ Her pretty eyes light up. ‘Was he a big, strong man? I loved Stallone in those films.’ Dumb blonde is such a cliché, but she is, though he would describe her hair as butterscotch yellow, and she is very pretty, he thinks.

James laughs. ‘No, Rimbaud, a French poet.’ He spells out the name for her. ‘Dylan Thomas was quite the opposite, a weak sort of physique he had.’

‘Why call himself Rambo then?’

James sighs. ‘Never mind.’ He scribbles some words on the paper on the table then scrunches it into a ball.

‘That’s my son, Barry, over there, playing with the red ball.’ She tells him, moving swiftly away from the subject of poetry.

A gawky woman approaches, all angles and ankles. ‘Hi Lucy.’ They canter into conversation.

‘Sandra. Are you going to join us?’

‘No, thanks. Who’s your friend?’ She inclines her head towards James. ‘Kept that quiet, didn’t you?’

She studies him carefully, changes the subject. ‘God, listen to that woman over there yelling at those kids of hers. Disturbs the peace don’t you think?’

James is thinking back to how peaceful it was when he’d arrived at the park that morning. How he had sat listening to the cawing of crows and watched one pulling a long worm out of the grass, poor thing wriggling frantically to escape the clasp of the beak. His thoughts had turned to Dylan Thomas and how the worms would have flenched his ample flesh by now, his bones ochre in the dust of the grave. He looked at the poem he’d just tried to write: A solitary magpie beads an eye on me,/ a writer, desperate for your muse /(and the second magpie),/ but scrunched paper fall at my feet. Yes, scrunched up is best.

‘Rough lot those kids of hers.’ Lucy is still speaking. ‘They bully my Barry if I don’t watch them. She says they just want to play.’

‘What? Oh yes, well perhaps they do.’

Wasn’t it Mallarmé who’d said words rather than ideas should come first? James has plenty of words and ideas, but they just don’t gel.

James is lost in thought. He’s a child in Ammanford Park. He is remembering something he would rather not remember; how he and his cousins bullied the little girl on the swing because she wasn’t wearing socks. They all wore socks in those days unless they were very poor or their mothers were bad mothers. How cruel they had been.

Can’t your mother dress you properly, one of his cousins had teased. Spends all her money on herself does she?  Except she’s in the pub, James had joined in. Drinking all her money instead of buying you socks. The second cousin tormented her, pushing the swing roughly. The little girl had cried. Leave me alone. My mother’s dead. She’d jumped off the swing and run away.

If James hadn’t felt awful about it then, he sure did now. How horrid kids can be.

James shuffles his papers around. ‘Don’t know. No kids of my own.’

‘Sorry, I’m disturbing you,’ she says. ‘What are you writing about?’

‘That’s the problem. I don’t know.’ He scrunches more paper into balls.

‘What’s the point then?’ Not so stupid after all, James thinks. Very pretty. Has he thought that before?

James is deep in thought again.  Nobody will ever make a pilgrimage to Ammanford Park to find inspiration from his poetry. They won’t find his words etched in stone. They won’t care where his den was, where he used to hide from the Parkie and where he and his cousins played Cops and Robbers, or Cowboys and Indians. How they had to march around the town on Whit Sunday dressed in their chapel-best clothes before they could enjoy the tea and games near the bandstand.  But here, in Cwmdonkin Park, he wants to tread in Dylan’s footsteps, find the place where he used to see the hunchback.

‘What’s the matter, Barry? Those kids bullying you?’

‘No, Mum, it’s just that I threw my ball in the air and it hasn’t come down yet.’

‘Maybe it got stuck in one of the birds’ nests.’ James joins in the conversation. The boy looks at him with interest.

‘Do you really think it got stuck in a nest? That’s cool. The bird will think it’s an egg. It’ll have a shock when it doesn’t hatch. What kind of birds make those nests, all close together like that?’

‘Wish I were. That’s called a rookery, Barry. Rooks nest all close together like that.’

‘Is that a rook, over there on the grass?’

James laughs. ‘No, but they should, shouldn’t they. Crows don’t nest close to each other.’

‘Why a murder of crows?’

‘Because they act as a judge and jury for their own kind. If one of them does anything wrong, they’ll gang up on it and if they think it did wrong, they’ll peck it to death.’

‘That’s wicked. And all those black and white birds over there? What are they? They look like they’re pogo-jumping when they hop around.’

James laughs. ‘Yes, they do. They’re magpies. A tiding of magpies. Don’t you know the  rhyme: One for sorrow, two for joy and so on.’

‘Yes, I’ve heard that. So what do all those birds over there stand for?’

‘There are far too many magpies for joy and sorrow computation.’

‘What does that mean?’

Lucy interrupts. ‘Barry, leave poor James alone. Go and look for your ball. I’m not buying you another one.’

‘He’s fine. He’s a clever boy, aren’t you? Here, we can play ball with all this scrunched up paper of mine, catch this.’ James and Barry throw paper balls back and for.

‘What have you been writing? Can I see? Let me smooth them out.’ Barry studies James’s attempts at writing. ‘Most of this paper is empty.’

James gives an embarrassed laugh. ‘My words got lost on the way to the page.’

‘Like my ball? Do you think the crows took them? Or the rooks to their nests?’

‘What a lovely thought. Yes, I think the crows have murdered my words. You know Barry, a very great poet used to come to this park to play with his ball. A long time ago. He wrote some words about losing his ball.’

‘What were they? Did he find his ball?’

‘Let me think. They were the last two lines of a poem called Should Lanterns Shine.’

‘Well that’s a daft title,’ Lucy says.’ What are lanterns for if they don’t shine?’

‘I can’t remember the exact words,’ James says, ‘but it was something about playing with a ball which didn’t come back to the ground.’

‘Same place as I mine I suppose. It’s still finding its way down. From the rook’s nest, or maybe just lodged in the tree. Like your words, James. Will you come and look for my ball with me?’ Barry asks James.

‘He can’t write poetry till he finds his words, just like I can’t play with my ball till I find it. Maybe he’ll find his words while we’re looking for the ball.’

James rises from his seat. He could do with stretching his legs. He edges around the table, brushing past Lucy. He can smell her perfume.

Sandra is approaching Lucy with her children in tow.

She looks around. ‘Your poet gone?’

‘Gone to look for his words.’  She laughs. ‘And Barry’s ball. They’re over there, look.’

‘He’s quite handsome for an old man.’

‘Not old, just older. I rather like him but I’m far too stupid for the likes of him.’

Scrabbling under these bushes is bringing back such memories for James. Hot summer days playing with his cousins. Their garden backed onto the park so even if his uncle grounded his cousins, as he often did, they’d climb over the wall and meet James in their den in the bushes. They’d play all day, chase each other around, chase the girls as they walked by, and frighten them with their blackened faces pretending to be pirates or some other baddies. They were such rogues.

‘Have you found it, James?’

‘No, I thought I saw something red, but it was just a chocolate wrapper. Keep looking.’

‘Shall I climb the tree to see if it’s in the nests?’

‘Best not.  Your Mum won’t be too happy if she sees you shinning up the tree.’

‘A new word. Shinning. What does it mean?’

‘It’s another word for climbing. You’re right, it is a word I could use in a poem.’

‘Hey. You could rhyme shinning with…um, binning. Yes, while I’m shinning up the tree, you could be binning the chocolate wrapper. Or winning my mother’s heart.’

James laughs uproariously. ‘You are so funny, Barry, and clever. Wouldn’t your Dad mind if I tried to win your mum’s heart?’

‘Nah, he left us years ago. There’s only Mum and me now. Do you think she’s pretty?’

‘Hey… Close your eyes. Hold out your hands. There.’

‘My ball. Yippee. Thanks James.’

James and Barry are breathless as they run towards Lucy.

‘Great. We can go home now then. Did James find his words?’

‘Ask him, I’m going for an ice-cream. Do you want one James?’

‘No thanks, I’ll just finish up my coffee and I’ll be going.  Don’t forget your ball, Barry, it reached the ground after all.’

James walks away from the park knowing it is to Ammanford Park he will be going next time. He glances down and smiles at the telephone number Lucy has scrawled on his hand. As he walks through the park gates he is alerted to the sound of a crow cawing overhead, flying away from Cwmdonkin Park, its beak an exclamation mark, its wings like commas. He watches till it is just a dot in the distance, like a full stop.

The New York Cuckoos by John Lee Langton is another short story that was inspired by a famous literate.