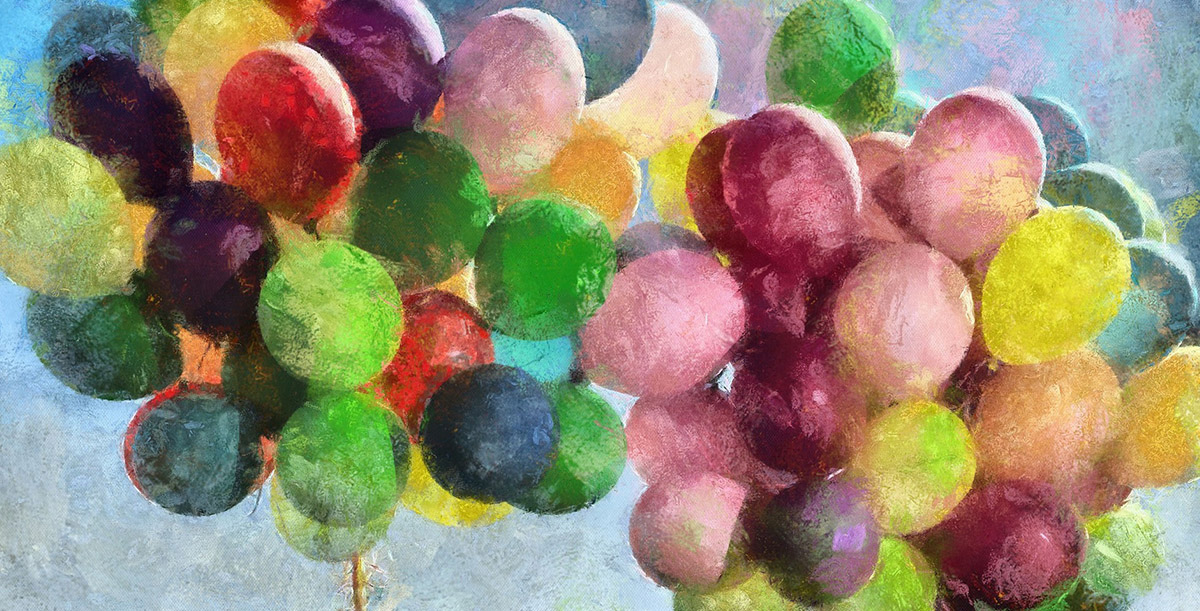 Emmeline beamed, her soapy fingers trying not to drop the phone into the kitchen sink. Such tiny things, the phones these days!

‘The kids are back, right?’

‘The kids…’ Well, they had been back – school ended two hours ago – but they’d come in, had their lunch, shouted ‘happy birthday Ma’, dropped a wrapped gift in her lap and promptly gone out again.

What day was it? Thursday. Of course. Netball for Kimberley, computer club for Jordan. They’d be back for their tea break. Jordan was still very skinny (and very tall), and Kimberley was one of the lucky ones, slender as a gazelle, pretty as a TV princess. Didn’t take after Emmeline. Resembled Emmeline’s sister, Rosemary, the one who’d turned atheist and did a degree in Life Sciences and went to Uganda to study… some form of animal – gorillas? baboons? Anyway…

‘Well, since no-one’s home, go ahead and open your gifts. Hope you can find mine!’

She was a lucky woman. Alan had never forgotten her birthday. He came home early, if he could; if he couldn’t he called her during his tea break.

‘Bye-bye. Have a blessed day.’

She did the dishes, put on the laundry (two teenagers generated outrageous amounts of laundry and a confusing quantity of odd socks), and made herself tea and cream crackers with condensed milk. The children would be back for dinner. In the meantime, they largely existed off muesli bars and smoothies.

On her birthday she allowed herself to have tea in the living room, on the sofa, instead of the dining table. She placed her tray on the glass-topped coffee table with a sense of shivery delight.

Then the gifts, Alan’s in purple glitter wrapper, the childrens’ in a kind of floral sparkly confection, probably done up at the actual gift wrap counter. How lovely!

Then she frowned. Something was wrong. There were usually three gifts.

Emmeline could usually predict her birthday gifts with prophetic accuracy. Alan – a crystal or porcelain kitten figurine for her collection. Kimmy – a bottle of her favourite perfume, Pleasures. Jordy – a box of Royce chocolates. Alan had trained them up from a young age, so Emmeline could reliably experience the delight of getting her yearly little personal treats without the disagreeableness of not knowing if she would, well, get the right treats.

Emmeline looked at the small oblong box suspiciously. This wasn’t a box of Royce chocolates. Was it perfume? With her fingertip she nipped open the card. ‘Happy Birthday Ma, from Kimmy and Jordy.’

Perhaps Jordy had used up his pocket money?

Emmeline frowned. No. That was impossible. She was forgetting. Jordy had more money than both she and Alan combined. Jordy, at fourteen, was the regional Z-GAMER video games champion on three different platforms (whatever that meant), both team and individual (like an Olympic sport, but not really – Emmeline really didn’t understand it). He was, moreover, ranked within the world’s top twenty in seven different games. Last year he had won twenty-five thousand dollars in some confusingly violent game involving guns and aliens, called… Outreach? Outback? Out… something.

Jordy competed every other month. He almost always won some money, and more often than not the top prize. It was no use pointing out that he was failing in English and Social Sciences. It made no sense to say he was lazy, he should just apply himself. He practiced gaming every day, four to six hours a day, and it was no use saying he should think about his future. He had already made more than enough money to buy his own home, once he was old enough to own it. Alone. In his dim, neon-lit man-cave. Emmeline shivered.

No, that also made no sense. Kimmy was not as rich as Jordy, but she was what they called an Influencer. Jordy, in a rare moment of communicativeness, had tried to explain it to Emmeline. Kimmy was pretty, vivacious, opinionated and did these videos which lasted only one minute, and she had fifty thousand followers, which sounded horrifically like some kind of cult to Emmeline, but apparently it was all right, because Kimmy got ‘sponsors’ who gave her makeup and vouchers and clothes and so forth. Kimmy had not had to actually purchase Emmeline’s perfume for many years. She always had a voucher to redeem or a follower at the perfume counter or something.

She decided to open Alan’s gift first. Reassuringly heavy. She peeled off the wrapping paper and was comforted to see a lovely Swarovski kitten, cunningly cut and sparkling in the light, playing with two balls of wool also cut from crystal, one pink, one yellow. It was very pretty. Alan never failed her.

Putting off the inevitable, she made space for the Swarovski kitten among the others in their glass display cabinet, an army of kittens cavorting around their wedding photo. Emmeline sighed, as she always did when she looked at their wedding photo. Alan, smiling down at her in his handsome blue suit. Her lovely princess dress, all satin and bows. She had to stand on a footstool to take this picture. The backdrop they chose was of an apple orchard. She was carrying a basket full of flowers. So pretty and pastoral! She’d been sad to return that dress to the rental place.

She returned to her tea and the ‘Other Gift’. The wrapping paper was printed with daisies and butterflies, sprinkled with glitter. It seemed menacing.

‘I’ll have my tea first,’ she decided and clasped her hands, and said a particularly long grace. Then she had her tea. Then she ate her biscuits.

And then the kids came home for dinner and she still… hadn’t made any.
She couldn’t escape, because Jordan came first and he always appeared silently, like a ninja out of the darkness. At first she was alone and then she wasn’t, and her son was observing her quizzically.

‘Not yet opened?’ Jordy spoke in fragments of sentences, only a fractional percentage of his brain given to reluctant IRL communication.

‘Not what you normally do.’ Jordy had lost eye contact and was gliding soundlessly towards the kitchen for a smoothie. ‘Since young. Presents can only be opened in private.’

‘Yes, well, since you’re both so… Westernised… I thought maybe we can do it the Western way. When you’re both… here to watch.’

Jordy shrugged. He was texting.

Moments later Kimmy was at the door, observing her mother with some exasperation. ‘You need help opening the present, Ma?’

Kimmy sat down beside her, a rare treat for Emmeline if she was but in the right frame of mind to appreciate it. Emmeline wanted to reprimand Kimmy for wearing makeup – she was sure she was – at seventeen it was inappropriate – but she couldn’t see the makeup, even this close. She was sure, because Kimmy didn’t wake up in the morning looking like this, but how could she comment on makeup she couldn’t see?

Jordy, obedient to some unseen signal from his older sister (how did they communicate? They seemed to do it without words. Sibling telepathy?) sat down on the other side.

Barricaded in, Emmeline gingerly picked up the present and began to peel it open.

‘Oh.’ She tried to put on a smile of delight, but it crumbled quickly to confusion. ‘Oh, kids, I don’t understand.’

‘It’s a phone, Ma,’ said Jordan, not looking up from his own phone, which was larger than her hand, brighter than their LED 62-inch TV screen and would have been louder than their stereo, too, except that it was plugged into a pair of headphones which made Jordan’s head look like it had been plungered on both sides. Emmeline didn’t like the earphones. They had bright green snarling skulls on each side. It made her boy, her lovely sweet boy, look like some delinquent.

‘It’s an iPhone, Ma,’ specified Kimmy. ‘The latest one on the market. Two thousand dollars, normally.’

‘Two thou—’ Emmeline was flabbergasted. She hadn’t been in the workforce for many years, but the last monthly pay check she recalled was well under two thousand dollars. ‘How can you—’

She bit back the retort. Her kids had money. She must be grateful.

‘I’m so blessed to have children like you,’ she began slowly and Kimmy made a small sound. Emmeline shut up. She was terrified of that sound Kimmy made, halfway between a ‘tch’ and a sigh.

‘Let me show you,’ said Kimmy, unboxing it with expert (manicured?) fingers.

‘You know, you didn’t have to… I’m happy with my old phone…’ Emmeline murmured.

‘It’s a Nokia clamshell,’ said Jordy with uncharacteristic energy and a kind of horror.

‘I’m a simple person. I just need a simple—’

When she was young she had been enamoured of a Japanese (dubbed in Mandarin and English) soap opera called Rin. She had never been able to find it on DVD. It had run on for hundreds of episodes, about a long-suffering, cheerful woman living a hard life in rural Japan. Emmeline had long since given up on ever seeing it again.

Now here it was, crystal clear on a screen just larger than her palm. Kimmy popped the earphones in Emmeline’s ears.

‘You can swap between languages,’ she said, ‘or put on subtitles.’

‘Subtitles! I can watch this in its original Japanese?’

Kimmy did something and suddenly Rin was speaking in mellifluous Japanese, a voice Emmeline had actually never heard before.

‘Happy birthday, Ma.’ She didn’t know which of them said it, but it didn’t matter. Emmeline was lost in the tragic adventures of her almost-forgotten heroine.

In their individual rooms, Emmeline’s children texted each other.

TBH i thot she had a stroke when I came in. Just sitting there, staring at the box.

IKR. See you at dinnertime. I ordered pizza.

Read Part One and Part Two.