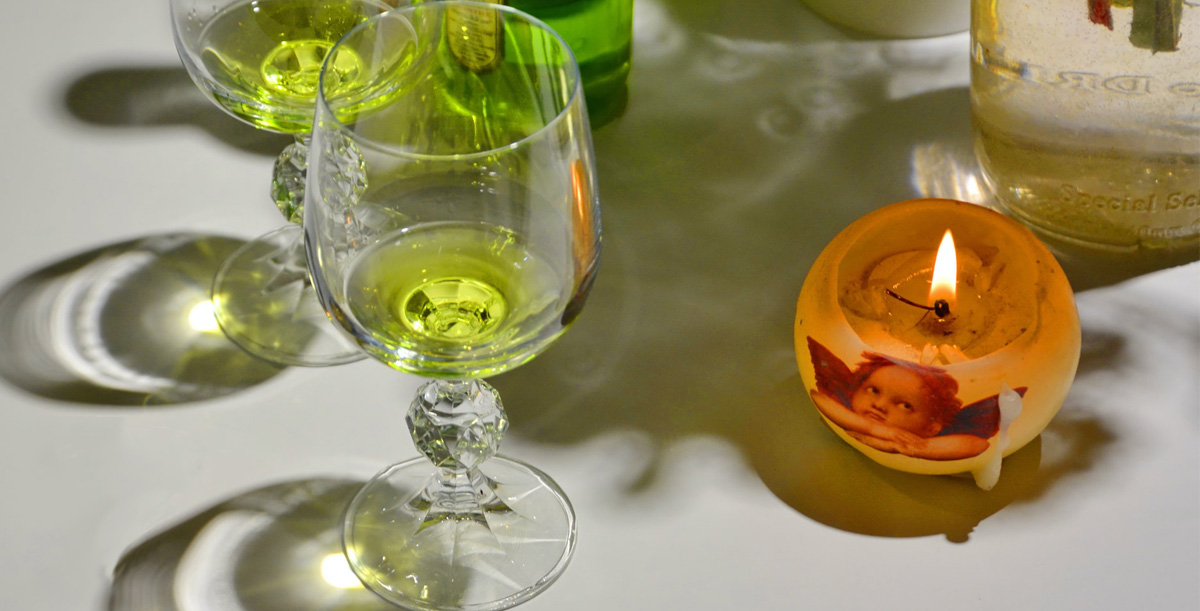 I first saw the green fairy on a Tuesday in April. The day had started, like most others, with the beginnings of a story. As I went about my early morning chores – taking Branwell for a walk; feeding Richard’s cat, Satine; making breakfast – I thought about my protagonists, Romina and Santiago. They were dancers, and in love. One of them was dying. But the story was accompanied by its usual baggage: self-doubt and envy. My stories were just that. Stories. Plainly told and unremarkable. The prose as stodgy as spotted dick. Richard, I knew, could have turned my story into something quite different; he somehow did something to his sentences that turned them into prose as light and delectable as… ‘meringue’ sprang to mind, and I berated myself for the instant conjuring of a cliché.

Richard always tried to comfort me. ‘But your stories make money!’ This was true, and it meant that we didn’t need to have as many bed and breakfast guests as we used to, and the writing retreats (which were far more profitable) were doing well. I enjoyed having writers in our home. I liked cooking for them and hearing about their struggles with narrative drive, psychic distance and that most contentious of writerly conundrums – past or present tense? And, of course, all the writers loved Richard, with his absinthe-inspired freewriting sessions, for which I had no stomach. Still, there was always so much laundry.

While eating my breakfast, Richard entered the kitchen, turned on the coffee machine and then kissed me on the head. ‘How d’you sleep?’ he asked.

He nodded and then refocused on his brewing coffee.

‘I had an idea for a story,’ I said, toying with my virtuous (though unremittingly bland) granola. ‘About two dancers who are famous for their Argentine tango. One of them is dying.’

Richard hmmed, extracted some pains au chocolat from the Aga and then sat at the table.

‘I like it. Though writing about dancing is difficult. It’s about getting the right rhythm. Mirroring the dance. Tricky stuff.’

‘I know,’ I said. ‘You’d manage it beautifully though.’

Richard paused for a moment to admire his breakfast before taking a sip of his café-au-lait. I asked him what his plans were for the day.

‘The accounts,’ he said, through mouthfuls of pastry, coffee froth on his upper lip. ‘And then I’m off into Bath. I got an email from David. You know, from Butler’s Antiques. He has a new spoon.’

I tried to refrain from making a face but my jaw let me down and I chewed on with a grimace.

Richard put down his pastry, wiped his mouth with a napkin and then threw it down on a table with an exaggerated sigh, his irritation as theatrical as ever.

‘They aren’t useless. They have to have holes in them so that the sugar water can pass through them and into the absinthe in the glass below.’

‘I know how they work! It’s just that if you look at it with an objective eye, fancy silver spoons with slots in them are ridiculous.’

‘And I am ridiculous,’ I added. ‘This conversation is ridiculous.’ I began to laugh. Richard huffed away his affront, deigned a good-natured chuckle, and then took another sip of coffee.

‘Sometimes envious of your… Is “focus” the right word? Or would it be “passion”? You know, the absinthe thing. And I’m jealous of the way your mind works. My thinking’s so A, B, C. 1, 2, 3. And yes, we’ve discussed this before – our brains are just different. Neither better or worse. But sometimes, I would like to not labour over my writing. Or become extremely anxious at the thought of filing my accounts for HMRC. And I’d quite like to be able to write poetry that finds obsessive fans.’

‘And I,’ he responded, ‘would like to have the sort of mind that would give me the tenacity to stick at a long-term project. And that is able to understand, instinctively, what it is that others need. Like when the children were little. You just knew what to do with them. I felt so… irrelevant. Also, I long for a brain that would give me some peace at night.’

He took my hand and gave it a squeeze. ‘Besides,’ he said, ‘most of the time I feel like a fraud. It’s the absinthe, you know, that makes my writing better than it should be.’

‘Are a crutch to my addiction. Yes.’ He sighed. ‘But you know, you should try some one day.’

We had lunch a few hours later: a croque monsieur with a glass of chambertin for Richard, a courgette carpaccio for me. I told him about the India ink stain that the idiotic award-winning poet had left on his duvet cover for me to deal with, and Richard told me about how his cash forecasting was going.

‘It’s looking good. Very good. Perhaps if I did some more freewriting workshops. Just evenings. That would bring in more money. Which would mean you wouldn’t have to do as much laundry.’

I nodded. ‘Well that’d be better than me spending the morning trying to shift an impossible-to-shift stain, as well as plotting a story that’s going nowhere.’

Richard then kissed me and left for Bath, eager to see the new spoon.

I went upstairs to my snug with a cup of chamomile tea. Branwell slumped down at my feet and I began to write. I knew how I wanted the story to start – Romina and Santiago would be dancing, they’d be in the middle of the tango – but I didn’t have quite the right words to make the opening work. An hour later, having done my research on dance terminology, as well as watching how-to dance videos on YouTube, I had to admit that I still had no idea as to how to make the story work and, indeed, where it was going.

The sound of Satine’s desperate meowing gave me an excuse to take a break. I went downstairs, expecting her to be in the kitchen, but she wasn’t there. Instead, she was scrabbling at the door to Richard’s study.

Satine, an already otherworldly black cat, stopped her scrabbling to convey to me with her eyes how stupid I was.

‘But what’s in the study that’s so important?’

She licked her lips and went back to her scratching.

So I opened the door, thinking that perhaps there was something (a rat or a mouse) that she’d sensed, but no, she headed straight for a small saucer that had been set down by the fireplace. It held a small amount of green liquid – absinthe – which she lapped up greedily. Satine then jumped onto Richard’s favourite armchair and with one last disparaging glance at me went to sleep.

I was about to return to my snug when something on Richard’s desk caught my eye: a blank sheet of paper with a fountain pen beside it. It looked so inviting that I couldn’t help but go over to the desk, sit down and toy with the pen. Richard’s absinthiana was all laid out on the desk. Why not? I thought. I would, at the very least, be able to tell him that I had tried it and hated it.

So I began on the absinthe ritual. Make sure the water is as cold as possible! I could hear Richard insisting. I went to the kitchen and brought back ice cubes and a jug of water. I then filled the ridiculous – though beautiful, I had to admit – water fountain, which was like a glass samovar but with several taps and an elongated neck so that a tall glass could go below each tap.

Now to choose a spoon from Richard’s collection. He had given each a name, which he’d written on a luggage label and attached to the spoon with a ribbon. I plumped for ‘Calliope’ with a wry smile, and wondered what this muse of a spoon had to offer.

I poured some of the liquorice-smelling absinthe into the reservoir glass, enough so that the bubble in the stem was full, and then rested the spoon across the top of the glass. Next, I placed a sugar cube on the spoon and slid the glass underneath one of the water fountain’s taps. As I opened the faucet iced water trickled onto the cube and dripped into the green absinthe.

Slowly, drip by drip, the green absinthe turned paler, cloudier. I kept my eyes on the glass, fascinated by the chemical process – the louche effect – and felt my shoulders relax. Satine meowed but I paid her no attention.

Once all the sugar had dissolved I closed the tap, stirred the last of the sugary water into the milky drink and then, with closed eyes, took a sip. It was bitter and sweet and rather like menthol, and it made me think of my mother digging around in the herb beds, bringing armfuls of fennel back to the house.

And when I opened my eyes, there, on Richard’s favourite armchair with Satine on her lap, was the green fairy.

For a moment I said nothing. Then: ‘Are you who I think you are?’

‘Yes and no,’ she replied. ‘But that is not an interesting question. Ask me something else.’

I looked at Satine, who appeared to be levitating; a translucent green lap underneath her purring body.

‘Physics, metaphysics… Again, that is not an interesting question.’

I kept my eyes on her and then took another sip of absinthe.

‘Okay,’ I said, trying my best to consider what would be interesting. ‘Why are you here?’

She smiled. ‘Now that’s an interesting question!’ She stroked Satine and said that she was here because I needed her.

‘Of course your story! So let us begin. Romina and Santiago, are they lovers?’

‘Yes,’ I said, my mind beginning to whirr.

‘No,’ she said. ‘that is boring. But one of them is in love with the other. Which one is in love?’

‘No! It is Santiago. And who is it that is dying?’

‘No! It is Santiago. And Romina does not care. Why does she not care?’

It was then that all became clear. Romina only cared for the dance, for being the best, for winning, and she would work Santiago into the grave, and he would not care because dancing with Romina, music coursing through his body, was everything. It was better than life itself.

‘Good,’ said the green fairy with a smile. ‘Now write it down.’

I don’t remember much after that, only that the sound of Richard’s car on the drive broke the spell. I looked up to see my glass was almost empty and that Satine was now bereft of her lap. The blank pages on the desk were covered in inked words.

As Richard came into the house I quickly stood but then had to steady myself; my head was reeling, still spinning with alcohol and thujone and words. I met him in the doorway of the study and when his eyes alighted on the dregs of absinthe in the glass a frown flickered across his face.

I suddenly embraced him with a fierceness I hadn’t felt for a long time.